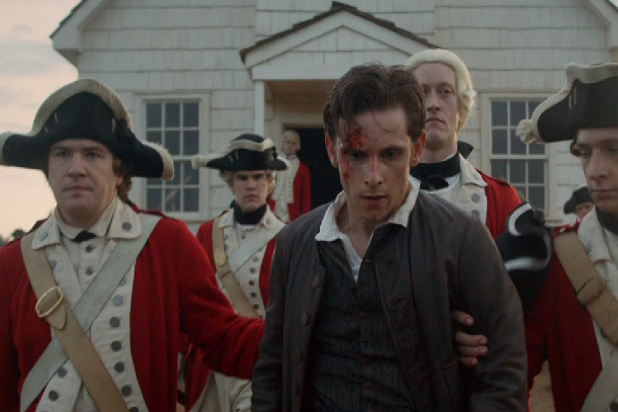 This is an era of close quarters and close combat, and the weapon that gets the most use is the bayonet. “Turn” gives you a commanding sense of what it might have been like to be a farmer in Long Island before the United States was a country, coping with debt, maggots, and which side to support in the coming war.

I have no idea if the show gets the number of buttons right on the uniforms. I don’t care. It does a good job of illustrating the basic human grievances of those living under the British Crown. They can’t trade freely, they have to treat the redcoats as their betters, and worst of all they must house them in their homes.

This is one of those details from high school history class we tend to forget because it seems so implausible: the Brits made their subjects provide room and board for their soldiers. Imagine a kind of compulsory Airbnb.

But I don’t expect AMC to play up the educational aspects of the show.  Because “Turn” is a tough enough sell as it is.

Not only is it a period piece, but it takes a “Wire” approach to storytelling, giving us lots of information before explaining what it means.

Worse, the show airs opposite “Game of Thrones,” another bloody epic packed full of white guys with hard-to-place accents. Both shows feature quick, bloody reversals of fortune, but “Game of Thrones” has a much wider sweep since its set in the land of pretend.

So here’s hoping AMC will be as patient with the ratings for “Turn” as it hopes viewers to be with its storytelling.

It helps that the show is well-acted, and that everything from the fonts to the costumes to the camerawork are gorgeous. You may need a while to puzzle out what’s happening on screen, but at least you can enjoy some lovely scenery.

People on the Eastern Seaboard in particular will delight in seeing the humble farmlands and swampy forefathers of modern-day New Jersey, Connecticut and New York.

Jamie Bell is sympathetic enough as Abe Woodhull, a farmer torn between two women, two causes, the past and the future. Being in the middle makes him a perfect candidate for being recruited into America’s first spy ring. Kevin McNally is excellent as his father, Richard, who stays loyal to the British occupiers and holds some sway with them as a result.

American spymaster Benjamin Tallmadge (Seth Numrich) has a shot at being the show’s version of “The Walking Dead” bowman Daryl – he’s not the lead, but he’s cooler than the lead, and he has better hair.

Other highlights in the ensemble are Rachel Lind as Anna Strong, whose politics kept her from marrying Abe. She’s as anti-British as anyone, which makes it all the more galling that she has to house a redcoat. He’s played by the captivating Samuel Roukin, an officer named John Graves Simcoe. His towering height and porcelain skin make him especially fascinating to watch.

All these relationships are a bit muddy at first, as was everything in 1776, apparently. For some reason Woodhull is willing to take a loan from his ex-girlfriend’s husband, but not from his father. Politics may again be at play.