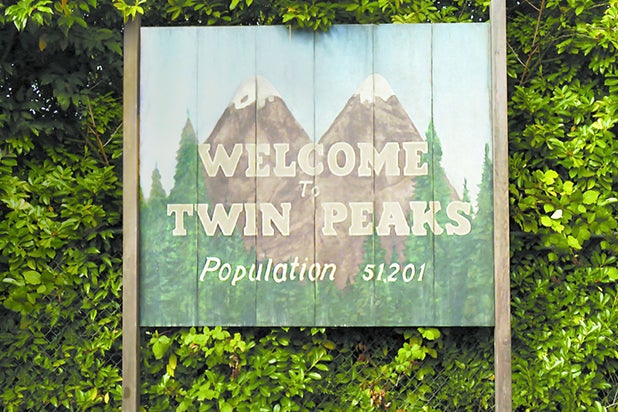 To write a review of a mystery story without knowing how it ends is absurd. You can’t possibly know how skillfully the storytellers have laid out their clues until you know where they lead. With Showtime’s “Twin Peaks” revival, we don’t even know what (if any) mysteries David Lynch and Mark Frost, our maybe-messing-with-us storytellers, intend to solve.

But I’ll dive in and say I love the revival anyway, the way I love pie.

I don’t eat pie to solve it or because each bite brings me closer to a solution. (Unless the solution is death.) I eat pie because I love the taste and smell and texture of pie. As Dale Cooper (Kyle Maclachlan) told us more than 25 years ago, when “Twin Peaks” aired on ABC, “every day, once day, give yourself a present. Don’t plan it.”

Which also means don’t overthink it. Cooper was talking specifically about coffee, and a lot of pieces written about the new “Twin Peaks” will joke about coffee and pie and logs and Douglas firs, because these are the simple delights the show endorses that we can all understand — whether or not we’re the kinds of viewers who create spreadsheets and binders and Reddit threads laying out our theories about what it all means.

The new “Twin Peaks” offers plenty of possible clues for that kind of detective work — the internet may need to build a new wing to house all the theories about what the number 430 means, or why Dale Cooper’s doppelgänger now looks so much like Killer Bob — but let’s also take a breather, and enjoy it for its sensory pleasures.

The way it was maybe always meant to be enjoyed?

Lynch is an strong advocate for meditation, and the new “Twin Peaks,” for all its wonderful lines and intriguing moments, might be best appreciated on a moment-to-moment basis. The wonderful, original show started to unravel when Lynch and Frost, under pressure from ABC (and us viewers) insisted on an answer to the instigating question of Who Killed Laura Palmer. Only after we had our not-very-satisfying answer did we realize it was more fun not to know.

Think about it for a minute: Almost every mythology-dense mystery show ended up breaking our hearts. Did we try to make them something they weren’t?

“Twin Peaks,” it turns out, isn’t at its best as a mystery, because mysteries need solutions. And things don’t need solutions to be delicious.

“Twin Peaks” is best when it’s about the state of not knowing. It’s about being mystified, not satisfied — except briefly, by lovely presents along the way. Being mystified involves an incredible mix of emotions — the childlike happiness in ignorance, and the very adult terror in not having all the answers. You can almost divide up the characters into the pure and childlike (Pete, the Log Lady, Donna, Lucy, Andy), the corrupt (Ben Horne, Leo, Jacques Renault) and the characters in between. There’s joy in the things they do and say, wherever it all leads.

Lynch, who co-wrote and directed the two-hour opening of the new series, is playing a game with us, but not the usual game, and we know this. In a conventional mystery, the viewer wins by solving the crime before the storyteller wants us to. We look for the gotcha moment of saying we saw it coming all along, because the storyteller got sloppy or unsubtle. We feel cheated in the game when we realize no solution is forthcoming.

Lynch manipulates these rules, and we let him. We’d be disappointed it he didn’t.

More than any other filmmaker, he gets to coast on being a weirdo: We give him the benefit of the doubt that if we don’t understand something, it’s not on him, it’s on us. And we play along with him not because we expect to win, but because it feels good and is fun.

He celebrates classic American images of white shirts and pink satin and diners and pie,  which mount a wholesome defense against the more sinister, damaged world of drugs and booze and sex and murder. Velvet, red or blue, divides the light and dark worlds, like the curtains in a theater.

Coffee, slicked-back hair and motorcycles straddle the worlds of darkness and light. We suspect Lynch is making fun of at least one of these worlds, but we don’t know where his sympathies lie. He never resolves a story in a way that would tell us for sure, and I hope he never will.

Trying to decipher his work is hard, but enjoying it as easy as… I’m sorry, but pie. Savor what’s in front of you, right now.

I’m sure many, many viewers will be frustrated by the opening sequences of the new “Twin Peaks,” which aren’t so much scenes as art installations. Horror of delightful horrors, delight of horrifying delights, they soon gel into a narrative that follows, when it so chooses, a certain dream logic. Characters and words don’t matter as much as the sensations they convey.

“You’re a bad girl, Tracy,” one character tells another.

Another line reading — “life in prison!” is an instant classic for reasons no one will be able to convey.

Lynch invites us to scrutinize these sights and sounds, to study his framing, try to make sense of that console (at least it… looks like a console?) behind the glass box. The views are magnificent, of sky-scraping buildings and trees. The show’s most immediately obvious change with the times is its use of sweeping, drone-provided aerials.

What hasn’t changed are the faces at the surface level. Lynch is known for casting beautiful people and filming them so beautifully that they seem like parodies of beauty. But the truth is he loves filming all kinds of physical extremes. He revels in all sorts of faces, from the ephemerally gorgeous to the square-jawed American to the comically befuddled.

One of the most underrated thrills of “Twin Peaks” is just watching the wonderful reaction shots of the townsfolk who just want to drive dependable cars or ride good bikes and stop off for a bite — the soap-opera heroic faces of people who just want to spare their homespun, boring world from those out to destroy it, whether through girls wrapped in plastic or barely-in-time drumbeats or demonic possession.

God what a good show this is. Who cares who killed who?