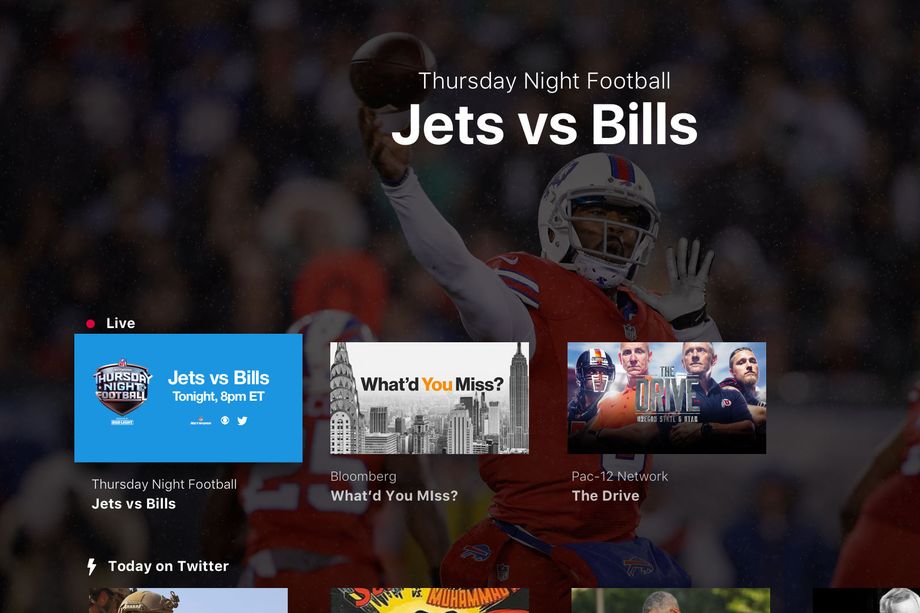 Twitter is coming to your TV. The social media network is releasing an app Wednesday for the Apple TV, Amazon Fire TV and Xbox One.

Keen observers might note the timing: just one day ahead of the first “Thursday Night Football” game to be streamed live via the service.

Instead of having to watch via a laptop or phone, fans who want to stream tomorrow’s Jets-Bills matchup can just download the Twitter app to one of the three set-top boxes. They don’t even need a Twitter account to watch the games.

Of course, you could also just stream via various options from CBS, the broadcaster whose feed Twitter will be using for five of s, including Thursday’s, or even just use an antenna, for those without a pay TV subscription.

NBC and CBS have joint broadcast custody of 10 “Thursday Night Football” games this season — five each. Twitter’s streams will come from the NBC and CBS broadcasts.

It was something of a shock when the NFL sold global streaming rights for 10 “Thursday Night Football” games to Twitter for a mere $10 million, back in April.

But the “global” part is the key to the NFL-Twitter deal. While CBS and NBC will be handling the broadcast duties and streaming on their own sites and apps, they’re limited to the U.S.

Also Read: Here's Why Twitter Stock Is Down Almost 6 Percent

The NFL has made no secret about wanting to expand internationally, playing games in London and, this season, Mexico City. Making the games easy to watch in international markets is key for these international ambitions.

For Twitter, the money is in the commercial slots that are held for local advertising — NBC and CBS get the national ad money, and those national spots will be seen by everyone watching the Twitter stream, but Twitter gets to sell the local slots in its stream.

The social platform was reportedly seeking up to $8 million for 10-game ad packages that included placements in pre- and post-game coverage on the service.

Twitter is also attempting to turn itself into a destination for live video. It’s signed deals with the PAC-12 conference, Bloomberg and CNBC-for-Millennials streaming TV network Cheddar to live stream their content.

While the Twitter set-up makes it easy for casual viewers to simply check in on events, the reason TV is so valuable — particularly to advertisers — is the length of time people spend watching it. So the more TV-like an experience Twitter can cultivate, the easier it will be to convince advertisers and programmers that it can deliver the same kind of audience.