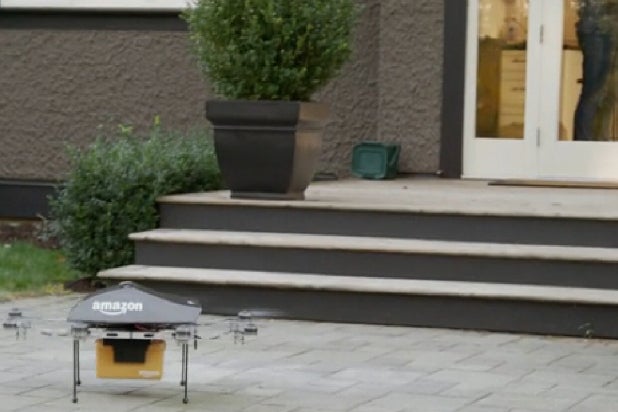 The ambitious secret R&D concept would utilize “octocopters” powered by GPS that could drop your Amazon.com order off on your doorstep within a half hour of checkout. Bezos says the idea is not science fiction — it is our legitimate online shopping future. The visionary executive sees the revolutionary method of shipping as about four or five years out from being our reality. So why not unveil the project on the eve of Cyber Monday?

Charlie Rose was impressed — but what about the common man? Naturally, the people took to Twitter to react. The posts reflected a mixture of shock, excitement and sarcasm, as only the instantaneous nature of social media truly can. Here are 12 of the best Amazon Prime Air jokes in 140-characters or less:

"I NEED SOME DECAF K-CUPS, WEE-WEE PADS, AND A BAG OF FUN SIZED TWIX IN THE NEXT 30 MINUTES. THIS IS DIRE." http://t.co/uf9xc0oniN

Also read: Amazon Makes Its First Exclusive Movie Deal – And It’s With A24

Is the Amazon drone dating anyone? I could use a bf with a job.

I predict that one day Kanye West is going to get married to an Amazon drone.

Is there a separate twitter I can check out for Tweets not related to the Amazon drone?

Feverishly working on my own drone system to shoot down Amazon drones. Got a lot of free merchandise coming

Just so you guys know, i'm keeping every Amazon drone that comes to my home.

Cyber Monday will be a national holiday when the Amazon Air drones take over.

Thanks, Amazon. Nothing creepier than a drone with a smile.

Please note: I will be delivering my tweets by drone today.