Free directed “Two Distant Strangers” along with Martin Desmond Roe, and the film that was acquired by Netflix tells the story of a Black man trying to get home to his dog who is stopped by police and killed, only to find himself caught in a “Groundhog Day”-style infinite time loop in which he relives the morning and gets killed by the same police officer over and over again no matter what he does differently. The film starred Joey Bada$$, Zaria and Andrew Howard.

On Sunday night during their acceptance speech, Free and his co-director spoke powerfully about police brutality, explaining that on average police kill three people every day. Their colorful, matching suits were even made to be a statement and tribute to victims of police brutality attacks.

“Over the last year I’ve developed some great creative relationships with some wonderful people at Endeavor Content, who I’ve found to be as committed as I am to making art that is not only entertaining but challenges our society, our culture and the world we live in. I’m really excited about the road ahead and the chance to create with their impressive team,” Free said in a statement. 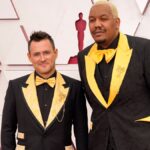 “We are incredibly excited to be in business with Travon. Between his background as a comedy writer and his revelatory debut as a filmmaker, there is no genre or idea he can’t bring his unique perspective to. We are longtime fans of his work across genres, and look forward to supporting Travon as he builds his company,” Joe Hipps, EVP of Television at Endeavor Content said in a statement.

Travon Free is managed by AGI Entertainment and his attorney is Jared Levine at Morris Yorn.