Here’s a sign of just how much the Academy liked the job that Bill Condon and Laurence Mark did producing the last Oscar show: they hired another team, and everybody accepted that move as business-as-usual.

It isn’t. In the 56 years since the first televised Oscars, the Academy has given the gig to a single producer 51 of those times. Bill Mechanic and Adam Shankman will be only the fifth pair to tackle the gig, following in the footsteps of Howard W. Koch and Melvin Frank in 1982, Quincy Jones and David Salzman in 1996, Richard and Lili Fini Zanuck (in AMPAS photo, below) in 2000, and Condon and Mark earlier this year. (In 1985, the gig went to a team of four producers.) 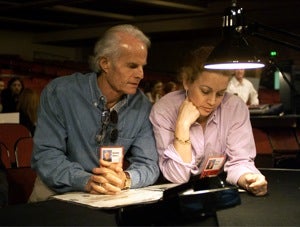 But in the review process that followed the last Oscar show, Condon and Mark strongly recommended the dual-producer setup, which had been tried a few times in the preceding decade. And just as they did when the pair recommended expanding the best-picture slate, the Academy listened.

So now we’ve got the making of a trend: after going 44 years with only one producing team, the show has now seen its fourth team in the last 15.

How will it work? Will Mechanic and Shankman neatly divide the workload and find different areas of expertise, or will they overlap and get in each other’s way?

There’s no way to answer that question yet, but we can look at the last few teams to see how they did it.

For Quincy Jones and David Salzman, the production process for the 68th Oscar show in 1996 was rocky. Jones was the face of the team, the guy who did most of the interviews and made brash proclamations about how he wanted to change everything about the Oscar show; back at the office, Salzman worked to pull it off. Some staffers found Jones’ ideas too grandiose, and Salzman easier to work with; others, like director Jeff Margolis, had problems with Salzman and tried to deal mostly with Q, as everybody called Jones.

A day I spent in the production office that year was instructive. In the morning, Salzman worked with writers who’d been brought in to punch up the script; dealt with the film clips; called director George Miller about a bit that would incorporate the title character from Miller’s movie “Babe”; and tried to fill open slots that should have been booked weeks earlier. Jones arrived at the office at 1 p.m., sat in on a quick booking meeting, and then went off to do two-and-a-half hours of television interviews.

Disorganized and chaotic, the show looked like a train wreck all through rehearsals. Then, miraculously, everything came together on Oscar night, and Jones and Salzman both came out smelling like roses.

Four years later, Richard and Lili Fini Zanuck became the first husband-and-wife team to produce. But make no mistake, this was Lili’s Oscars: when director Louis J. Horvitz asked Richard why he wanted to produce the show, the 65-year-old Hollywood vet and Oscar-winner shrugged and said, “I don’t. She does.”

During production, Richard would sit back quietly and give his input. Lili, meanwhile, ran around the Shrine Auditorium, energetic and engaged. Richard dealt with the biggest stars – when somebody needed to help Arnold Schwarzenegger, who got testy when he had trouble reading the TelePrompTer, it was Richard who calmly led him through the process. But Lili was the show’s mover and shaker.

When it came time to accomplish the show’s most unpleasant task – firing Whitney Houston after a shaky Friday-night rehearsal left music director Burt Bacharach convinced that the troubled singer wasn’t up to appearing in a lengthy medley – it fell to Richard to make a late-night call to Houston’s manager. Lili, meanwhile, found a replacement in Faith Hill, for whom she’d directed a music video.

The last team to handle the job, Bill Condon and Laurence Mark, fell into a natural division of labor. Condon was in some ways the idea man, while Mark worked more closely with the show’s top executives to make things work. And when you’re trying to sell the Academy on ideas like removing all the seats in the front orchestra section of the Kodak Theater, and replacing them with new seats that have to be specially made and shipped in from across the country, it helps to have a couple of voices making the argument.

At the Kodak, the show’s crew reportedly saw much more of Mark than Condon, who worked with director Roger Goodman but rarely interacted with stagehands and other crew members who normally have regular contact with the producer. During the show, Condon occupied the chair behind Goodman in the control truck, where a single producer normally sits; Mark spent more time in the wings of the stage, watching the comings-and-goings.

My favorite Oscar production duo, though, is one that never was. At the 42nd Oscar show, in 1970, the Academy originally turned to director Mike Nichols and screenwriter Frank Pierson to collaborate on the show. Pierson, who later became president of the Academy (and who during his four years in office always hired solo producers for the Oscars), once told me that the two men quit when they found themselves up against one of the inexorable truths faced by all Oscar producers.

“We were still conceptualizing,” he said, “very early in the process, when we started feeling that we were failing, and that we weren’t going to be able to do what we wanted to do.”

The problem was simple: “As Mike said, ‘Every time we got a show going, some asshole had to hand out an Oscar.’”