Tyler Perry has another hit on his hands with “Boo! A Madea Halloween,” the sequel in which he stars and also wrote and directed.

The movie had enough momentum to unseat Paramount’s Tom Cruise vehicle, “Jack Reacher: Never Go Back,” which was originally predicted to be the No. 1 movie this weekend.

Perry discussed the film’s success with TheWrap on Sunday:

TheWrap: It looks like you have another “Madea” hit on your hands. How do you feel right now?

Tyler Perry: I’m having a pretty good day. After all these years to see that the audience is still showing up and have new audiences coming, it’s very exciting. What I’ve found is that kids can become an expert on you in two weeks now by binge watching all of your stuff. That was an option we didn’t have in my generation, so it’s great to see.

The idea, in fact, the literal title of this film comes from Chris Rock‘s 2014 dramedy “Top Five.” Does Rock get a writer’s credit or a check?
There’s no payment and there’s no writer’s credit, but I have been looking for his number all morning, so I’m going to give him a call tomorrow to say just how much I appreciate the inspiration of it.

Critics don’t typically give “Madea” movies high marks, and this one has a 29 percent on Rotten Tomatoes. Do you have anything to say to the critics right now?
Nope.

Why do you think Madea endures as such a popular character?
People love this type of grandmother. She’s still around. It’s been 18 years and to see people still coming, it’s very moving to me still because I certainly didn’t think I would do it this long. To see it’s still working, I’m very happy about that. 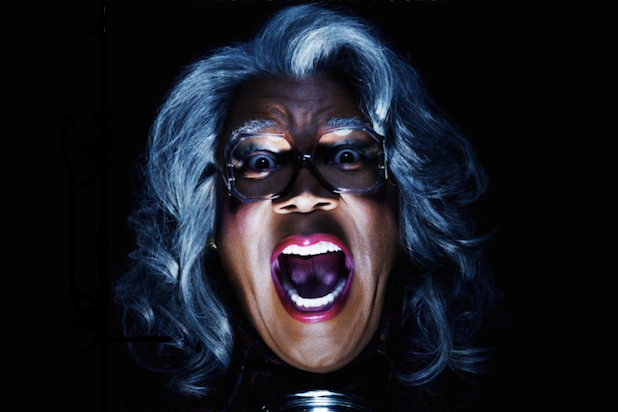 This time Madea is reaching further beyond the black community, attracting a more diverse audience. How do you think that has happened?
It’s been happening organically over the years. When I’m live on stage [performing as Madea], the audience is very mixed. It’s 50/50 with white people and African Americans — it just depends on what city I’m in. Very specifically the social media influencers [who were cast in “Boo! A Madea Halloween”] absolutely attracted a diverse audience. I wanted to put them in this movie and the message to be for younger people, 13 and up. Using them, I think, was a good idea because I think Hollywood now knows their followings transfer from the internet to them. Take Yousef Erakat, who is very talented, popular and has millions of subscribers. Tons of people showed up for him and Lexy Panterra, Brock O’Hurn, Kian Lawley and Jc Caylen.

What would you say to people who have never seen a “Madea” movie?
I would like them to check it out to see if it’s their cup of tea. If you enjoyed “Mama’s Family,” then this is for you. The Professor Clumps, Eddie Murphy in the “Nutty Professor,” then this kind of movie is for you.

How much of this weekend’s box office boost do you attribute to the Jimmy Fallon “Tonight Show” skit that went viral?

I think it’s all a part of it. Jimmy was really gracious in making that happen. When I was there a few months ago he said he would make it happen. It’s more than one thing that got it all done.

The skit was so funny, I was crying I was laughing so hard.
In that case, I have to thank Trump, too. Yup.

From the skit we learned Madea is a Clinton supporter. Which candidate are you backing?
First of all, Madea can’t vote because she’s a felon. But I will be voting for Hillary.

What will we see next from Madea?
I’m not working on a sequel to this particular movie, but I am working on something that will have more international appeal. Brendan O’Carroll who does a character called Mrs. Brown, which is huge in Europe. I’m working very closely with him. I’m putting a movie together for the two of us — Mrs. Brown and Madea.

When all is said and done how many Madea movies do you think there’ll be?
I’ve said this many times and I’ll say it again: The minute the audience stops coming that old broad is dead. But every time I say it they show up. So, as long as they want her to, she’ll be around. But I’m determined not to be her age playing her. I’m just really grateful the audience showed up. My audience is like the country music audience — they’re so loyal, so faithful, and as always, I’m grateful to them.

Where does ”A Madea Homecoming“ rank in the Madea Cinematic Universe?