Five and a half years ago, Bono stood in a backstage hallway at the Kodak Theater and wrestled with the idea of being big and grandiose.

“I f—ing hate the room,” said U2’s front man, an hour after finishing what had been a tense, rough rehearsal of “The Hands That Built America,” a song from Martin Scorsese’s “Gangs of New York” that had won the band an Oscar nomination and a spot performing on the show.

It wasn’t just the Kodak itself he hated; it was also the Oscar set, with a giant, fluted shape that lit up behind the band as they performed. “We’re singing a song about poverty underneath a huge f—ing Waterford crystal,” he told me, visibly uncomfortable with the swanky surroundings. “I just have to forget the room and let it go.” (Photo of U2 at Oscar rehearsal, 2003, by Art Streiber) 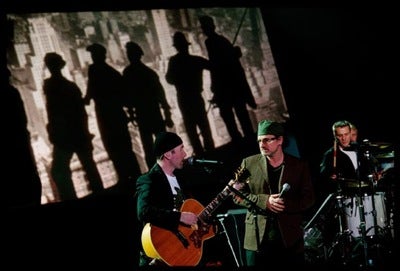 That encounter came to mind Sunday night when I watched U2 perform at the Rose Bowl beneath a set that out-glitzed the Kodak and dwarfed that huge f—ing Waterford crystal.

Now, I realize this is a bit off-topic for an Oscar blog. But U2 were, in fact, Oscar nominees once upon a time. And since I wrote about the troublesome business side of the tour in theWrap before the Rose Bowl show, I figure a few words about the creative side might be warranted here.

I’m not exactly coming to this show in a vacuum. I’ve seen U2 about 25 times over the last three decades, spoken to them on at least a dozen occasions, and watched them struggle and triumph and fail.

I saw them do their first L.A. show in early 1981 at the Country Club, a 1000-seat nightclub in Reseda, where Bono wore a ruffled, long-sleeved white shirt and they had so little material that their encore consisted of three songs they’d already done earlier in the set.

I saw them open for the J. Geils Band at the Sports Arena the following year, when before the show it seemed logical to ask if this little band could possibly come across effectively in a 15,000-seat arena.

I saw Bono leap off the loge level of the Sports Arena in the middle of a 1984 concert, and then after the show tried to answer his intense, serious questions about whether he’d been nuts to undertake such a foolhardy gesture in an attempt to forge a connection with the audience he felt he’d lost earlier in the show.

I watched him slip and cut his chin open during rehearsals the day before the “Joshua Tree” tour started in Phoenix in 1987, and then saw the opening concert the next night, when his chin had been stitched up but his voice was completely shot, forcing the audience to cover for him by singing along to songs both old and new.

I saw U2 grow from clubs to theaters to arenas to stadiums, grappling along the way with self-importance, with the scale of their fame and the demands it made, with the greatness they desperately wanted to achieve and the compromises their ambition forced upon them.

Which is a long, roundabout and more-than-slightly self-serving way of saying I’ve got a history with these guys.

And their outdoor shows have always been particularly fascinating. The U2 show I’d rank as the best I’ve ever seen, for instance, came at Dodger Stadium on the “Zoo TV” tour in 1992; it was a night of glorious chaos, sensory overload in the service of what I still think is their richest batch of songs.

And the U2 concert at the Los Angeles Coliseum on the “Pop Mart” tour five years later was by far the worst I’ve ever seen, a monumentally shiny but empty show that left me feeling distanced from a band I thought I knew; it was as if they’d been feigning insincerity for so long it was no longer an act, and an impassioned encore version of “One” was so apt (“Did I disappoint you?/Leave a bad taste in your mouth?”) as to be almost unbearable.

Which brings me to the Rose Bowl, where U2 performed beneath a structure so enormous and expensive that they’ve played to 3 million fans and grossed $300 million without turning a profit.

Yes, the stage is huge. And hugely impressive. It occupies so much room that it makes everybody feel closer to the band, since the four arms of the structure reach toward every corner of the stadium.

And yes, placing everything – lighting, sound, video screens, disco balls – well above the band does sometimes cause the enormous structure to “disappear,” which show director Willie Williams says is the point. If you want, you can just focus on the band, not on the pseudo-spaceship hovering above their heads.

One drawback to this, though, is that once the stage disappears, you’re quickly reminded of just how far away you are from the four guys you came to see.

And it was sort of cool to find myself sitting in a spot where, if they connected the dots between Zachary Quinto, Maria Sharapova and Jane Seymour, I’d be inside the triangle … but to tell you the truth, I’d rather be a little closer to the band, and not have to rely on those admittedly amazing video screens.

(That’s the view from very good seats; I suspect that fans sitting further away might have found it easier to just get into the hugeness of it all. And I haven’t seen the YouTube broadcast, so I have no idea how the scale came across there.)

Bono has said this tour is separated into an initial, more personal section and an ending that becomes more political – but really, it’s U2 being U2, using remarkable technology, a batch of new songs and almost 20 older ones to craft a narrative about connection, dislocation, frustration and occasional transcendence.

I missed a few of the old standbys (the elastic, resilient “Bad” more than “Pride (In the Name of Love),” which can use the rest), but thought that the new material cast some of the standards in a new light: “Sunday Bloody Sunday” was surprisingly fresh, coming after a playful, slinky revamping of the new song “I’ll Go Crazy If I Don’t Go Crazy Tonight.”

The best part wasn’t the hits, or the anthems (though “One” gives me chills every time I hear it, and that will never, ever change), but the little moments that gave the show that playful feel: a bit of Beethoven’s Ninth Symphony as an intro to “Get On Your Boots,” a few lines from Daniel Lanois’ “The Maker” at the end of “Beautiful Day,” “Amazing Grace” as a lead-in to “Where the Streets Have No Name,” plus Ben E. King and the Rolling Stones and the “Carousel” standard and English soccer anthem “You’ll Never Walk Alone” …

Easing in and out of their own songs, cavorting on their expensive new playground, relying on the crowd in those moments when Bono’s voice frayed and broke, the show had something unexpected in a stadium extravaganza: an offhandness and lightness that clearly came from simpatico musicians who’ve spent three decades figuring each other out.

Could they have done this on a smaller, simpler stage, and made lots more money in the process? Sure they could have.

Sometimes, though, if you’re U2 just need to build the world’s biggest, grandest, gaudiest stage, stand on it, and let it go.