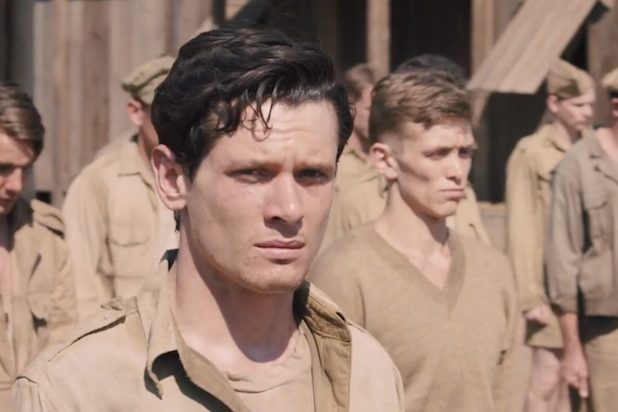 After much hype from Universal Pictures, Angelina Jolie‘s “Unbroken” finally hits theaters on Christmas Day — but is it any good?

According to the critics counted on Rotten Tomatoes, it’s fine, but probably not the awards contender the studio was hoping for. Although declared “rotten” with a 48 percent critic approval rating, individual reviews seem to be filled with mixed emotions that should boost Jolie’s confidence behind the camera, and star Jack O’Connell‘s in front of it.

TheWrap‘s Alonso Duralde, for example, found the movie flawed, but full of strengths that will hopefully carry on to Jolie’s third directorial effort, “By the Sea.”

“There are powerful moments in ‘Unbroken,’ to be sure, but it also feels like the kind of generically grand-scale movie that five other directors could have made in exactly the same way,” Duralde wrote in his review. “Ultimately, the strengths of ‘Unbroken’ far outweigh its flaws; given that we know the fate of its protagonist, Jolie keeps us engaged in his travails, which the similarly-themed ‘Rosewater’ didn’t manage to do.

“It’s a handsome production, featuring a fine ensemble (that also includes Garrett Hedlund) who remain on-point through what must have been difficult filming circumstances, as well as a potent reminder that the Second World War, for all the glamorizing it endured over the ensuing decades, was as horrifying and devastating as any other conflict in human history.”

“[Jolie] turns the undeniably inspiring true story of Louie Zamperini into an oddly old-fashioned drama. It’s gorgeously shot and beautifully acted, and it has moments of heartbreaking poignancy, but it’s also nearly suffocated by its own nobility,” Nashawaty wrote. “O’Connell, a real star on the rise who bristled with mad-dog menace in the recent prison drama ‘Starred Up,’ is totally hypnotic. And the physical deprivation he underwent for the role is impressive. I just wish that Jolie’s film had the same rawness. Instead, it’s moving, admirable, and occasionally exhilarating.”

USA Today critic Claudia Puig extended many of the same compliments, but pointed out a major flaw: It’s “slow to the point of tedium.”

“Perhaps fewer scenes chronicling his torturous days at the prison camp and a conclusion that included his attempts at reconciliation would have made the story more compelling,” Puig wrote. “A closing shot of the real Zamperini, at 80, running at the 1998 Olympics in Nagano, Japan, is deeply moving. He died earlier this year at 97. A documentary featuring his personal recollections might have been more fascinating than this big Hollywood movie. Though O’Connell’s vulnerable lead performance is terrific, ‘Unbroken’s’ unrestrained hero worship undermines the story.”

LA Weekly critic Amy Nicholson found that Jolie’s approach to telling the powerful story of an Olympian lost at sea, and then brutally tortured by the Japanese was a touch too brutal for her taste.

“Jolie is more fixated on gore than grace. In making us feel every crushing blow — the better to burnish her reputation as a serious director — we’re shortchanged on the beauty of Zamperini’s story, and we exit blinking into the theater lobby with our hands still clenched in fists,” Nicholson wrote. “‘Unbroken’ wants it all: the big cinematography, the close-up grit, the postcard flashbacks and the grisly Götterdämmerung that earns directors awards. But it aches for a lighter touch — the facts of Zamperini’s life more than stand on their own.”

Digital Spy critic Simon Reynolds was particularly impressed with the picture, shot by cinematographer Roger Deakins — an 11-time Oscar nominee — and recommended it wholeheartedly to those voting for this year’s Academy Awards.

“‘Unbroken’ looks poised to break into the Best Picture Oscar race. Trauma cuts deep into the heart of its hero, but the intensity never ratchets up to a level that’s likely to put off the silver-haired Academy voters who hold plenty of sway,” Reynolds wrote. “Perhaps the most impressive thing about “Unbroken” is how comfortable Jolie seems behind the camera. This has an old school classic Hollywood feel, its story an eclectic mash-up of ‘Chariots of Fire,’ ‘Jaws’ and ‘Bridge on the River Kwai.’ This is all well-worn territory, however it’s still accomplished enough to suggest acting’s loss could ultimately be cinema’s long-term gain.”