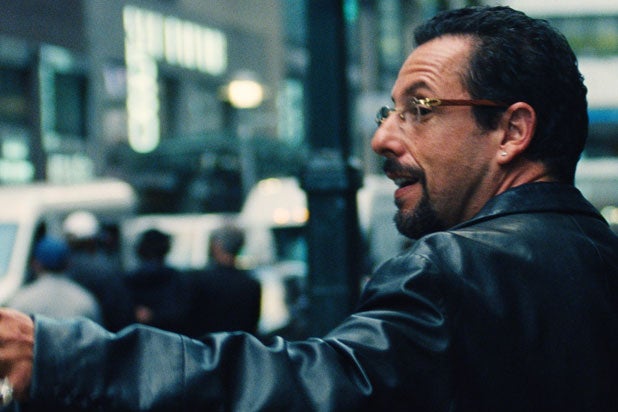 If you’re looking for cinematic tour guides to the road to ruin, you can’t do much better than Josh and Benny Safdie. The New York-based indie filmmaker brothers are masters of a certain type of adrenalized, immersive storytelling that puts us up close with characters whose default mode is desperation.

Two years ago, they rocked Cannes with the heist-gone-wrong thriller “Good Time,” starring a mesmerizing Robert Pattinson. And this year, they’re back with “Uncut Gems,” a blast-furnace character study starring Adam Sandler as a New York jewelry salesman with an unerring instinct for finding a way to screw up everything he touches.

After a brief prologue set in an Ethiopian mine, “Uncut Gems” delivers the most instructive trick shot imaginable: It opens on a rock containing opals that seem to shimmer with every color of the rainbow, with the camera plunging into the mysterious depths of the opal before emerging back into daylight via the intestines of Sandler’s character, who’s undergoing a colonoscopy.

In other words: Here’s a movie in which the promise of rare beauty and unimaginable riches will end up all going to … well, you know.

Not to belabor a shaky metaphor, but the movie’s a gas.

Sandler plays Howard Ratner, a perpetually panicked businessman who owns a store in Manhattan’s diamond district, has a wife who hates him (Idina Menzel) and a girlfriend in a spare apartment who usually likes him (Julia Fox). We think of Howard as a nice guy because he’s got Adam Sandler’s face, but he’s really a mess, perpetually hustling to stay ahead of creditors who aren’t shy about using hired goons to collect.

Every time Howard gets the money to pay back one debt, he uses it on high-stakes bets that he thinks will help him pay off others as well. Naturally, this is a recipe for disaster, though it seems likely that Howard could find a way to create chaos around him under absolutely any circumstance. (When he recites the plagues of Egypt as part of a Passover seder, he might as well be describing what he did last weekend.)

But that rock of opals that we saw at the beginning of the movie is, Howard thinks, the answer to all his troubles. It’s on its way to him, he’s sure it’s worth $1 million or more, and there’s a tony auction house ready to bring him the big bucks, as long as he can keep from messing everything up.

Like Howard, the Safdies also have a knack for creating chaos — but unlike Howard, they’re at their best creating an onscreen atmosphere of chaos and ruin. Between the Robert Altmanesque sound mix with conversations jumbled on top of each other, the camerawork by Darius Khondji that remains jittery even in the quiet moments and the Daniel Lopatin music that uses stately choral passages not to lull but to disrupt, the Safdies are maestros of messiness, and they are absolutely at the peak of their games here.

The easy shorthand is that this is a change of pace for Sandler along the lines of his Paul Thomas Anderson film “Punch Drunk Love.” But the actor hasn’t been a one-dimensional funnyman for many years, if he ever really was — his understated performance in “The Meyerowitz Stories (New and Selected)” showed that two years ago.

“Uncut Gems” turns up the volume several notches from that performance, but it reinforces how good Sandler is at being a hangdog Everyman. His nonstop, unchecked desperation is wholly convincing, intermittently funny and occasionally pretty moving.

Also Read: National Board of Review Names 'The Irishman' the Year's Best Film

The rest of the cast clearly gets a kick out of the craziness, too. Lakeith Stanfield is a blur of hyperactive bluster as a guy who brings Howard prospective clients, including basketball superstar Kevin Garnett, while Garnett does a very convincing job of playing a version of himself who happens to be obsessed with the opal during a playoff series.

At close to two and a half hours, “Uncut Gems” is a wild and long ride that refuses to let either the characters or the audience relax. But hey, you don’t go to a Safdie Brothers movie to relax — you go to let them take you on a hell of a ride.

Or is it a ride to hell? With these guys, it can sometimes be hard to tell the difference.