A reboot of the 1992 Steven Seagal action film “Under Siege” is in the works at Warner Bros. for HBO Max, with Indonesian director Timo Tjahjanto attached to direct, according to a Deadline report.

Umair Aleem is writing the script. Tjahjanto and Aleem developed the pitch for the reboot together.

The original “Under Siege” starred Steven Seagal as Casey Ryback, an ex-Navy SEAL turned cook who is the only person who can stop a group of terrorists when they seize control of a U.S. battleship. The film also starred Tommy Lee jones and Gary Busey. It is currently unknown if Seagal will have any role in the version. 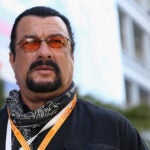 Tjahjanto first broke out by directing the “V/H/S/2” segment “Safe Haven.” He is currently attached to direct the remake of the Korean hit film “Train to Busan” for New Line, currently titled “Last Train to New York.”

Tjahjanto is represented by WME, Management 360 and attorney Marios Rush.