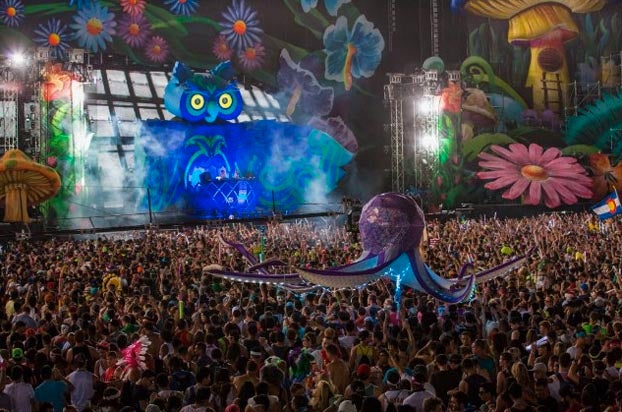 Part concert movie and part “The Amazing Race,” “Under the Electric Sky” follows six groups as they converge on the Electric Daisy Carnival in Las Vegas to dance their hearts out.

The 3D movie is visually stunning, emotionally stirring, and slickly made, but it loses steam as the marathon concert wears on. By the end, it’s as tediously repetitive as some of the dance music it celebrates.

Co-executive produced by Carnival impresario Pasquale Rotella, the movie treads lightly on the drug usage that is an established presence on the rave scene, instead pumping up the themes of love and acceptance while lingering a tad too long on some of the mugging faces of certain scantily-clad attendees. Co-directors Dan Cutforth and Jane Lipsitz have a background in TV reality shows including “Top Chef” and “Project Runway,” and it shows, both in the film’s slick production values and its repetitive themes.

The first few times we hear EDC attendees enthuse about how much acceptance they’ve found at dance music concerts, it’s affecting, but after a while the observation starts to make the production seem like an offbeat infomercial at best. At worst, it comes off as apologia for the darker, drug-fueled side of these concerts.

“Under the Electric Sky” is at its best in the beginning, as it follows the groups getting ready for the concert. Their excitement is palpable: There’s an anxious girl from small-town Texas, a group of dudes traveling from Cape Cod in an RV, long-distance lovers, an unconventional rave “family” with open relationships, a man in a wheelchair, and even a long-term couple preparing to tie the knot at the festival.

The movie traces the elaborate set-up of the event, which contrasts nicely with the earlier underground raves. Old-timers amusingly explain the covert ways they used to find out about raves that now can be texted or tweeted to interested parties.

As “Electric Sky” unfolds, there are nods to drug use — turns out one of the pals of the Boston guys OD’d a few months earlier — and a visit with medical personnel doing their best to prevent mishaps amid chants of “Please help me find molly.” Then it’s on to more music and more delirious fans.

The directors, who previously produced documentaries about Katy Perry and Justin Bieber, keep the proceedings as light as possible. But by the time the sun rises after the first day, the movie’s charm has begun to wear off. Cross-cutting between the fan subjects becomes less effective with time; the rave family especially wears out its welcome. Even a deeply emotional tribute by the Boston guys toward the end fails to rouse the way it should; all but the most ardent fans will have long ago been ready to call it a night.

The movie arrives a week after two more deaths at the latest EDC concerts, and that’s something to think about after the music ends. In the meantime, sit back and enjoy the show; it’s quite a spectacle to behold.