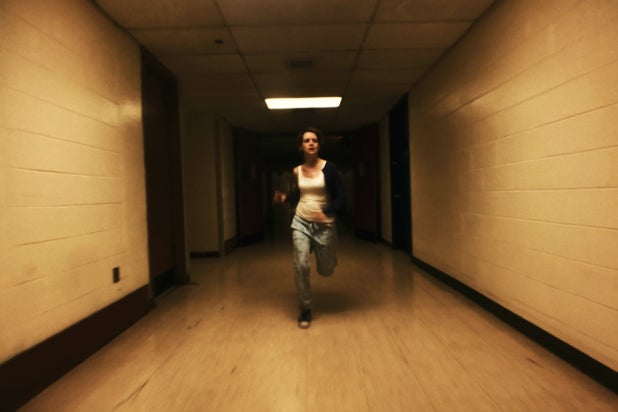 Although it may unfairly (and reductively) be described as “that movie Steven Soderbergh shot on an iPhone,” “Unsane” is a nerve-wracking, remarkably timely movie about the unwanted attention women receive from men, and the often-unpleasant consequences of trying to speak up about it.

Soderbergh, working fast and aggressive but perfectly in control, recruits “The Crown” star Claire Foy for an intimate, disturbing psychological thriller that deftly transcends its cheapie backstory and dingy look to explore the fortitude required to survive an insidious, traumatic encounter in a world that doesn’t believe, or understand, how much pain they can cause.

Foy plays Sawyer Valentin, a skilled but troubled businesswoman who makes no room — and has no time — for ambiguity, professionally or personally: at the office she earns top marks treating clients with ruthless honesty, and then utilizes dating apps at night to instigate hookups where she guarantees action but makes it absolutely clear there’s no romantic future.

Also Read: Steven Soderbergh Wants to Only Shoot Movies on iPhone Now: 'This Is the Future'

Realizing that she is still haunted by the face of David Strine (Joshua Leonard), a man who once stalked her, Sawyer investigates a nearby facility that offers support groups for victims like herself. But she inadvertently commits herself to their care after filling out what she thinks is routine paperwork, landing in a ward alongside Nate Hoffman (Jay Pharoah), Violet (Juno Temple) and others with more severe mental disabilities.

When Sawyer’s efforts to prove her mental well-being seem to be interpreted repeatedly as acts of hostility, she prevails upon Nate to call her mother Angela (Amy Irving) for help. But just as her mother shows up to seek her release, Sawyer is confronted by a vision of David inside the facility, working as a member of its staff. Desperate to leave the asylum as the faculty increasingly ignore her pleas for help, Sawyer plummets into a downward spiral of fear and self-doubt, further challenging her to question what about her experiences, and even her memories, is and is not real.

There’s something sort of exhilarating about the epiphany that the movie arrives at, oh, halfway or so through regarding Sawyer’s treatment; whether or not it’s all in her head, co-writers Jonathan Bernstein and James Greer skillfully pinpoint the feeling that women must experience in dealing not just with harassment but also the institutions that are supposed to protect them from it, and then transpose that directly upon the audience. But rather than driving viewers mad with anticlimactic ambiguity, Bernstein and Greer resolve that central mystery so that the film can deal with her circumstances in a more direct and realistic, yet terrifying way.

(It bears noting that the writing here represents a giant leap forward from the team’s previous screenplays, including “Larry the Cable Guy: Health Inspector” and the Jackie Chan vehicle “The Spy Next Door.”)

Unlike too many other times when filmmakers mistook a story’s narrative quandary for its message and its ultimate meaning, Soderbergh acknowledges the “is this happening or not” business as a necessary hook for trailers and general intrigue but discards it to look more deeply into a culture of toxicity with regards to the treatment of women by men.

What eventually unfolds is a dialectic, really, between a damaged but resilient woman and a world unable, or unwilling, to come to terms with her true pain. As Sawyer, Foy draws an astute distinction between rationally understanding herself and how her behavior comes across to others, most notably the staff at the institution, and the vulnerability of dealing with emotional injuries that do not and will not easily heal.

It’s her candor about what she deals with on a daily basis that lands Sawyer in the asylum, but the response by the staff is largely one of indifference; prescriptions and platitudes quickly take the place of deeper and more substantial investigation into her traumatic past. Not only are her more immediate claims about David in the asylum dismissed, their root causes — the events that initially drove her to seek help — are never investigated, metaphorically and literally reducing another woman’s feelings to sensationalistic hysteria.

Suffice it to say that the “no duh”-ness of these ideas might make “Unsane” a more obviously unpleasant experience for some viewers, but even without those thematic underpinnings, Soderbergh crafts an unsettling, top-notch cat-and-mouse game from minimal elements, including, yes, the iPhone upon which he apparently shot the film. (Mileage may vary on the effectiveness of its murky, deep-focus cinematography, but it feels all of a piece with the subject matter and locations.)

Notwithstanding a possibly credulity-stretching lack of supervision by the asylum staff, the slow escalation of Sawyer trying to be heard, and getting ignored and abandoned to deal with one triggering event after another, becomes positively maddening the longer she spends among people who are ostensibly there to help her — and with or without David there to dredge up a terrifying experience she moved 450 miles to escape.

Foy brings a knowing precision to her performance, giving Sawyer the bluntness, and clarity, of a person who for her own sake cannot afford vagueness or, perhaps more accurately, a margin for error. Simultaneously mature and self-aware and desperately vulnerable, Foy’s performance recognizes the character’s need for help is sufficient that she unwittingly leads herself into a dangerous situation with the institution.

As David, meanwhile, Leonard oozes a homicidal creepiness that feels even ickier when he’s being nice; the actor seems to completely understand the character’s pathetic delusions about their relationship, and never sacrifices believability for the sake of emphasizing an unease that already exists simply by virtue of the persistence and intractability that Sawyer ascribes to him in her characterizations of the limited relationship they once shared.

This film follows “Magic Mike,” “Side Effects” and “Logan Lucky,” a chain of films by Soderbergh where he seems to alight on a genre, or an idea, but instead of just following it to a conventional end, resolves that hook early and then delves into the typically unexplored aftermath, or maybe just something more interesting. This is the closest that the filmmaker has thus far delved into horror, but his aptitude for building tension, and his sensitivity to characters too often defined by the world’s perception of them, has only appreciated with time, making it add up to something more than the component parts of any particular genre.

In which case, whether shot on an iPhone or just screened on one, “Unsane” effortlessly flexes Soderbergh’s skill as a storyteller and a technician, injecting the atmosphere and mechanics of a creepy scenario with a substance that deepens and elevates it to the stuff of a harrowing, intimate reality.