In the trailer for his feature documentary “Val,” “Top Gun” and “Batman” actor Val Kilmer talks candidly about his slow recovery from treatment for throat cancer. But with his ability to speak hindered, he uses hundreds of hours of home movie footage that he’s shot across decades in order to tell his full story.

“I’m still recovering and it is difficult to talk and to be understood,” Kilmer says in the trailer, including at one point speaking through a voice box. “But I want to tell my story more than ever.”

“Val” is a feature documentary from A24 that will be released by Amazon, and the film shows how throughout his career he turned his home movie camera on at all times and catalogued all his material across years, saying that he was one of the first people he knew to own a home video camera. He even shot footage from the sets of his films much to the chagrin of his directors, offering glimpses of young Sean Penn or Kevin Bacon in the trailer. 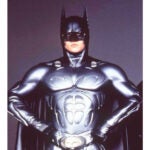 The film, which is directed by Leo Scott and Ting Poo, aims to peel back the layers of Kilmer, understanding his behavior, which in recent years has been seen as eccentric and unusual.

“Val” will make its world premiere Wednesday at the Cannes Film Festival out of competition, and Amazon has also set release dates for the documentary, first on July 23 in theaters followed by its debut on Amazon Prime Video on August 3.

Check out the first trailer for “Val” here and above, and see a poster from the film below: