Two days after reports surfaced that Kevin Spacey will star in Franco Nero’s upcoming film “The Man Who Drew God” with Vanessa Redgrave, reps for the actress say that she will not appear in the Italian drama.

“Vanessa Redgrave’s name is being included in recent stories relating to the casting of the upcoming film ‘The Man Who Drew God.’ While there have been discussions about the possibility of her joining the cast, she will not appear in the film,” read a statement from Redgrave’s reps obtained by TheWrap.

Redgrave, 84, has been married to Nero since 2006. The Italian actor best known for appearing in the “Django” spaghetti western films has reportedly cast Spacey in his first film role since multiple sexual assault and misconduct allegations were raised against him in 2017, including dozens by actors who worked at London’s Old Vic Theatre while Spacey served as creative director from 1995 to 2013. Spacey has declined comment on the casting. 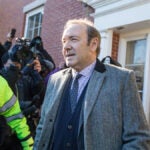 A criminal charge against Spacey in Massachusetts was withdrawn by the alleged victim, while two other charges in Los Angeles were not pursued by the district attorney due to the statute of limitations and the death of one of the accusers. But the actor is still the subject of an ongoing Scotland Yard investigation tied to the Old Vic accusations, with investigators having passed findings over to state prosecutors.

“I’m very happy Kevin agreed to participate in my film,” Nero said in a statement to ABC News this past weekend. “I consider him a great actor and I can’t wait to start the movie.”

Redgrave most recently appeared in the Roadside Attractions coming-of-age film “Finding You,” which was released earlier this month, and is also set to appear this year in Livia De Paolis’ “The Lost Girls” alongside Emma Thompson.