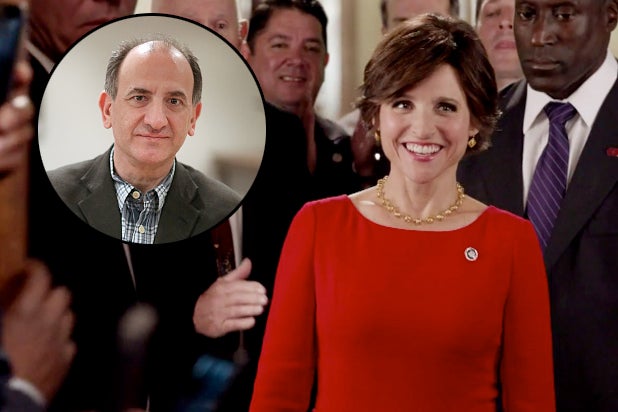 “Veep” has been nominated for Emmys every one of its four seasons, but its latest round of awards recognition is especially meaningful for creator and showrunner Armando Iannucci since it’s also his last season with the show.

“I was very pleased with the season,” Iannucci told TheWrap Thursday. “So I was pleased that was recognized.”

“Veep” has been nominated in nine categories, including Best Comedy Series and three acting nominations, for Julia Louis-Dreyfus, Anna Chlumsky and Tony Hale. Iannucci himself is nominated three times, for Series, Best Directing and Best Writing.

After this season, though, Iannucci is stepping aside and letting “Curb Your Enthusiasm” showrunner David Mandel take over the reigns.

Below, Iannucci talks about how he’s been celebrating “Veep’s” latest Emmy nods, why he decided now was the right time to leave his show and why not even “Veep” can top Donald Trump as a parody.

Congratulations! What was your immediate reaction and how are you celebrating?
It’s dinner time here in the U.K. so I had some nice wine and some strong cheese, and some very nice bread.

Who do you think is going to be your stiffest competition?
I think “Parks and Rec” might have a strong chance. This is our fourth season and we’ve been nominated every season, so you never know, we might have the momentum. I sound like a sports pundit here, but I never think about what might win. I’m excited to get the nomination, the recognition, and delighted for Anna, Julia and Tony and also our crews and everyone, very happy to get the directing one, I think it’s our first. So I think just generally, I was very pleased with the season. So I was pleased that was recognized.

Yeah, that’s really amazing, to start off a show already really strong and then have it get stronger every year — a lot of people are saying Season 4 was actually the best one yet.
Oh, thank you. I felt good about it. As we finished everything up, I felt pretty confident about it. It is my last one, so I wanted to make sure I ended on a solid note. And that felt good.

Why are you leaving?
Practicality reasons. I’m based in the U.K. and I have a young family. It involved a lot of bizarre commuting between the U.K. and America and after four years, you realize jet lag doesn’t get any better. Spoiler alert: It gets worse. I thought under the circumstances, I’d given it my all. It felt like the right time. I’d taken the storylines to where I wanted to take it. It felt like the best thing for the show — it’s going to get a whole new shot of energy. Fresh ideas, fresh people, fresh minds on it. It just felt like the right time to say, “OK, I’ve done this thing, I think we’re all happy with it, so let’s see what else it can do.”

Are you leaving behind a plan for the rest of the series?
No, that’s all up to David Mendel. We chatted about it, we all agree on a basic outline, but I sort of feel it’s important that you step back and you let the new guy feel like he’s in charge. The whole spirit of making everyone feel like they can contribute. Whatever works, whatever makes it the best that it can be. So if that means giving David the freedom to do it, then that’s what it involves. Having had conversations with him, I’m pretty confident about what he wants to do and I look forward to seeing it.

Have you been following the 2016 election? It almost feels like it could be a “Veep” plotline, all these crazy candidates.
It’s the “15 and Counting” candidates. Trump is hilarious, Hillary is hilarious, Jeb is…not hilarious. That’s his strong point, isn’t it? That he’s not hilarious. So I’m watching it as an interested observer this time.

“Veep” doesn’t really do a lot of cameos, but is there a candidate you’d like to see on the show, or be parodied on the show?
Well, everyone’s been saying Trump is a parody of one of our characters. It’s difficult to match him. Maybe this is all David’s plan, maybe he’s already set up a Trump character. Really, all this is just a promotion for Season 5.