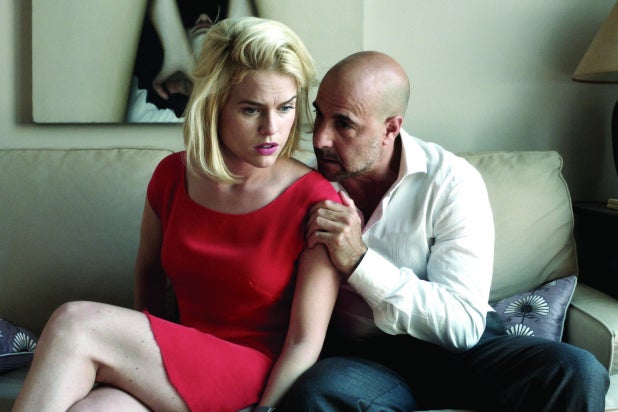 If you’re going to dedicate your movie to August Strindberg, and your name is not Ingmar Bergman, you are likely writing a check that your screenplay cannot possibly cash.

But even though writer-director Neil LaBute commits this name-dropping hubris in his latest, “Some Velvet Morning,” you’re likely to find the film intriguing — so long as you’re willing to think of it as a whirl through Harold Pinter and David Mamet territory rather than as a 21st century “Miss Julie.”

Stanley Tucci and Alice Eve are the only performers in this real-time confrontation, and they’re both in prime fighting fettle. Fred (Tucci) shows up unannounced on the Manhattan doorstep of Velvet (Eve) with luggage in hand; he’s just packed up and snuck out on his wife of 24 years, ready to make a new life with his mistress.

Velvet, however, seems less than thrilled by this turn of events. Awkwardly, she keeps mentioning that she has to leave soon for a lunch date with none other than Fred’s married son, whom she used to date. (She once slipped a note in Fred’s pocket after a family dinner, thus beginning their affair.)

Over the next 82 minutes, the two engage in verbal battle, drawing out what the other one wants and deciding whether or not to offer it up. Fred leaps on Velvet’s every word, calling her out for what he perceives as hypocrisy or prevarication. As for Velvet, she seems torn between staying and leaving, between inviting Fred to stay and kicking him to the curb.

With his early films “In the Company of Men” and “Your Friends & Neighbors,” LaBute garnered a reputation, earned or not, as a misogynist. With “Some Velvet Morning,” the balance between genders seems to be in check; Tucci may be both physically and verbally overwhelming, but Eve almost always matches his power. And just when we’re prepared to think that one of these people is a monster and the other a victim, LaBute lets the audience — and, occasionally, the characters themselves — in on a new piece of information that completely reverses the roles.

Tucci is in his wheelhouse here, and while it’s been entertaining to watch his lighter side in movies like “The Devil Wears Prada” and “The Hunger Games,” this film allows him to deliver huge amounts of bluster and wounded machismo.

As for Eve, a beautiful and gifted actress too often relegated to cinematic window-dressing (her most memorable moment in “Star Trek Into Darkness” involved stripping down to her skivvies), she takes full advantage of this opportunity to play a complicated woman whose motivations may or may not be admirable ones. She keeps us (and Fred) guessing from start to finish, and it’s an electrifying performance that will, if there’s any justice in the world, bring more rich parts her way.

LaBute takes this two-hander into some very dark places before springing a last-minute switcheroo that is bound to generate audience debate. I’m still mulling over whether or not I think it’s a brilliant bit of commentary that caps off the storyline or a gimmicky trick, but either way, it doesn’t diminish the impact of everything that’s come before.

“Some Velvet Morning” doesn’t reinvent man-vs.-woman theater (it’s an original screenplay), and there are moments when you can feel LaBute being a little too impressed with his own wordplay, given what we come to learn about the characters. But it’s a twisty and vitriolic barb-fest that should please audiences in the mood for respite from holiday cheer.