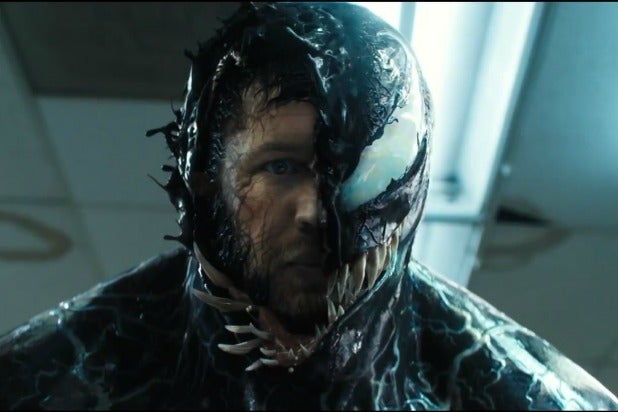 (Spoilers ahead for the end of “Venom.”)

“Venom” got off to a rough start with critics, with reviews garnering only a 30 percent fresh rating on Rotten Tomatoes at press time. Despite that, Sony is banking on “Venom” being the start of a new film series — going so far as to tease a Woody Harrelson-starring sequel in a surprise mid-credits scene.

If you’re not particularly well versed in Marvel Comics lore, though, you probably have no idea what was going on in that scene between Harrelson and Venom himself, Tom Hardy, or what the significance is of Harrelson’s character popping up there.

And that’s OK! That’s what we’re here for.

In the scene, we see Hardy’s Eddie Brock paying a visit to someone in the deepest reaches of San Quentin prison — this is the big interview he mentioned to Anne (Michelle Williams) at the end of the movie. This person is a very, very dangerous serial murderer. And it’s Woody Harrelson! A pretty big name to pop up for the first time in a mid-credits stinger.

So after a little bit of back and forth, Harrelson delivers this big declaration: “When I get out of here, and I will, there’s gonna be carnage.” That’s actually a pun, because Harrelson’s character is none other than Cletus Kasady, who in the comics bonds with a symbiote called Carnage.

Now, Carnage is not just another symbiote like Riot. Carnage is actually the “spawn” of Venom, so they’ll have a different sort of relationship than the symbiotes in this movie do.

It’s not likely that Kasady has the Carnage symbiote just yet, though, unless it was somehow created by accident during the movie without us noticing. More likely they’ll save that whole thing for the next movie, should it happen.

It’s notable that in the comics Carnage is much more powerful than Venom because, essentially, of how intense and murderous Kasady is. It’ll be particularly interesting to see how they handle that dynamic — typically it requires Venom and somebody else, like Spider-Man, to deal with Carnage.

But Spidey is locked into the MCU and Venom’s on the outside looking in for now, so it’s likely that Venom will have to figure out how to handle Carnage on his own in a hypothetical “Venom” sequel.

Either way, the prospect of Woody Harrelson as the bad guy in a “Venom” movie is pretty enticing. Let’s just hope he doesn’t suffer the same fate as Paul Giamatti’s Rhino from “Amazing Spider-Man 2” — lost to history because they never made that third movie.