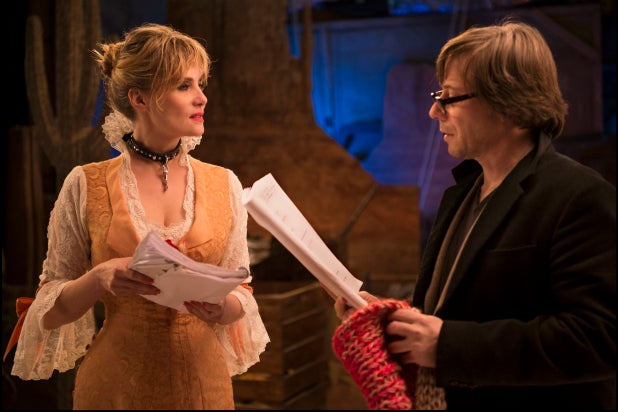 Everyone’s ideal foreplay is a little different; sometimes a lot different. For 19th century Austrian writer Leopold von Sacher-Masoch, it involved whips and a pair of dirty, dirty boots, at least if his sole major work, the 1870 novella “Venus in Furs,” is any indication.

Sacher-Masoch inadvertently gave the world the term masochism (thanks, Leo!), but there’s apparently something the matter with male sexual surrender. The concept is hardly settled in playwright David Ives‘ new imagining of Sacher-Masoch’s novella, and Roman Polanski contributes to his fun-for-a-while French-language adaptation a sense of romp and farce and unease to the procession of power exchanges that make up the film’s plot.

Much of that unsteadiness is by design. “Venus in Fur” challenges the simple fantasy of the female sexual tyrant by making the tussle for dominance much more fluid, and hence more exciting. Mathieu Amalric plays Thomas, the scornful writer-director of a new stage adaptation of Sacher-Masoch’s “Venus.” He’s searching for a “real” woman, unlike the dozens of ingénues who sound like “ten-year-olds on helium.” So when a rain-drenched, cheaply dressed, frazzled-looking mess arrives hours late for her audition and begs for a chance to prove herself, he’s less than impressed, even if she shares a name with the character she hopes to play.

Vanda (Emmanuelle Seigner, Polanski’s wife) exudes sexual confidence, though, and as soon as she gets in costume, Thomas is trapped by his own wants. The two begin acting out the (fictional) adaptation of Sacher-Masoch’s work, in which a Victorian nobleman becomes the sexual servant of a middle-class widow.

The aristocrat’s true desires were revealed to him in a childhood episode in which his fur-clad aunt and her two friends flogged him for their own amusement. Vanda quickly figures out that Thomas has a much deeper affinity for his play than he’d like to let on, and she’s quick with her own (not entirely wrong) interpretation of the source material: it’s about child abuse.

Though the film never leaves the building, and we never encounter another character other than these two, the narrowing of the scope to just the relationship between actress and director doesn’t feel claustrophobic, but instead deliciously tight. Vanda exploits her audience of one to seduce Thomas, both to make him feel smart and irresistible and to expose his inner self and to hector him about how misogynistic his play is.

Vanda towers over Thomas and boasts sharper, more perilous cheekbones than the cliffs of Dover, while his best asset is a frumpy version of the haircut that made Justin Bieber a YouTube sensation. While he admiringly stands in a puddle of his own drool, she assumes his responsibilities, directing the lights, the sound effects, the stage directions, even rewriting the script. Despite the fiancée who’s waiting for him at home and the fact that he’s such a control freak he uses Wagner as his ringtone, Thomas becomes hopelessly, brainlessly smitten.

Were Ives’ play simply a farce about the narcissism of men in charge, Polanski’s film might be a light, sexy trifle. But “Venus in Fur” has grander ambitions than serving as extensive foreplay: something smarter, and yet less satisfying. The film ultimately lapses into some of the sexist dynamics it criticizes, and the disappointing denouement feels more like a literary exercise, a play of allusion and ambiguity, than an emotionally substantial resolution.

In too-obvious costuming, Vanda wears dominatrix-y lingerie and a dog collar. Even more obvious, though, is the divertingly cunning way she capriciously jerks Thomas around between his fantasies and reality. Each time he’s convinced he’ll worship Vanda now and forever, the actress deliberately says something gum-snappingly bimbo-ish to yank him out of his reveries and into irritation.

Polanski’s guilty of leaning on this gag a few too many times, but Amalric’s performance is understated enough that his increasingly frank displays of sexual frustration are a treat. And Seigner? She’s the foul-mouthed, fair-minded goddess to whom we should all dedicate a long day of devotion.

Inkoo Kang is a film and television critic. She previously served as the Chief TV Critic at MTV News, and her work has appeared in Vanity Fair, Wired, The Atlantic, and Rolling Stone. She currently writes about technology and culture at Slate.
The essential source
for entertainment insiders