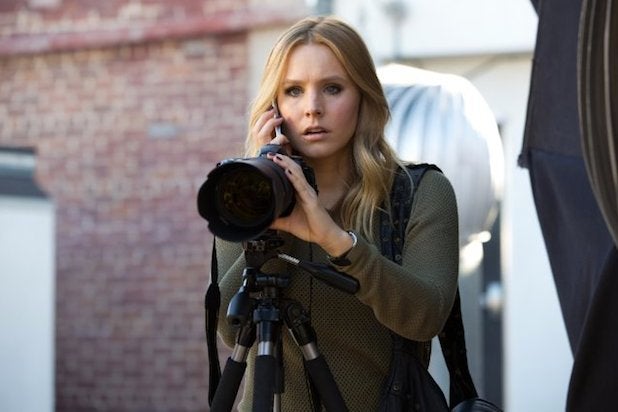 It took seven years and a Kickstarter campaign for creator Rob Thomas to get his wise-cracking, amateur sleuth “Veronica Mars” on the big screen, and fortunately for fans interested in seeing what she’s up to these days, the majority of critics think it was worth the wait.

The mystery movie — a continuation of a cancelled CW series starring Kristen Bell as the title character — has garnered a 73 percent “fresh” rating on Rotten Tomatoes, with 58 out of 80 critics giving it a thumbs up.

TheWrap‘s Alonso Duralde, who had never seen the show, was among the majority who enjoyed watching Mars get back into investigative action in her hometown when an ex-boyfriend (Jason Dohring) calls for help after being accused of murder.

“I realize I’m late on this, not having seen the show, but Bell is flat-out terrific, mixing spunk, smarts and sex in a way that brings to mind the leading ladies of Hollywood’s golden age. There aren’t a lot of people working today who merit comparison to the likes of Jean Arthur and Rosalind Russell, but Bell’s working on that level here,” Duralde wrote in his review. “The ensemble cast is generally fast and funny, zipping through the script’s clever repartee, and even ‘Mars’ newcomers will find themselves welcome in their company, even if we don’t always know who’s an ally and who’s secretly a murderer.”

TheWrap’s senior TV reporter Jethro Nededog approached his review from the perspective of a longtime fan of the series, so he was happy to see Thomas and his co-writer Diane Ruggiero (who executive produced the series) craft a story that’s as much about murder as it is growing up.

“The movie takes a good while setting up the town, the crew of new and old characters and the clues that may or may not lead Veronica to clearing Logan’s name. That story builds to a thrilling pace, though, and shows that Thomas/Ruggiero have a firm grasp of what makes this chapter worthy of being shown in theaters and not just an extended episode of ‘Veronica Mars,'” Nededog wrote. “Even better than its central murder story, the movie also gets that like Veronica, the show’s fans have grown up too. That’s new for this franchise.”

Los Angeles Times critic Betsey Sharkey felt the movie had something for everybody: the fans, the newbies and especially the 91,585 crowdfunders who pitched in to make the whole thing possible. Even better, the film “ties up a lot of loose ends and opens up a new can of worms,” in case the public — or maybe a network or studio next time — demands more.

“It is clear in every frame that the filmmakers and actors really appreciate that loyalty. It doesn’t make for a particularly ambitious film, but it is a satisfying one as it moves easy, breezy over familiar terrain,” Sharkey wrote in her review. “There is a sense of empowerment and a new confidence in the choices being made by Thomas, but there is also so much more to say. Whether a sequel or another series is in the offing, the movie leaves the door wide open. That is just so Veronica Mars.”

Detroit News critic Tom Long called the Friday release, which is being screened at AMC theaters and through video on demand, “the best episode ever of ‘Veronica Mars.'”

Much of this probably has to do with writer-director Rob Thomas finally getting to do things his way, with no network interference, thanks to the film’s Kickstarter funding. It also helps that the story isn’t dragged out over a season of episodes,” Long wrote in his B+ review. “In the center, of course, is Bell, still right on target with the wisecracks and attitude that made ‘Mars’ work. With the success of ‘The Hunger Games,’ ‘Gravity’ and Bell’s ‘Frozen,’ strong women are finally being acknowledged in Hollywood. Guess what? ‘Veronica’ was there all along.”

Chicago Tribune critic Michael Phillips felt the film was “adequate,” but felt it was only capable of serving the interests of the fans.

“The film, which is adequate , cares not about the newbies. Although “Veronica Mars” does its duty in identifying the major characters on the fly, as they make their entrances and get out of the way, this one’s strictly for the fan base,” Phillips wrote in his review two-star review. “The film’s air of take-it-or-leave-it has its charms, but the murder mystery itself isn’t one of them.”

New York Times critic Manohla Dargis also wasn’t impressed by the “likable,” albeit “unmemorable, feature-length footnote to the admired television series,” and even recommends viewers pay more to watch the movie at home on VOD.

For about twice an average movie ticket, “they and everyone else can watch it the way that it should be seen: on TV,” Dargis wrote in her review. “That the theatrical release feels like a wrong move isn’t about the nominal limitations of television, but rather its strengths. The original series hasn’t aged; rather, like all good TV it feels perfectly preserved, like a butterfly in amber.”