Vice World News is launching a new digital series on July 11 to highlight conflicts at and life on borders around the world, TheWrap has learned. New episodes will premiere weekly on Sundays.

“Border to Border” will run on Vice News’ YouTube channel and will highlight issues at borders around the world in two-episode sets, with each side of the chosen border getting its own episode.

Each two-part examination will look at the conflicts and exchanges that take place on borders, from crime and commerce to culture and migration. 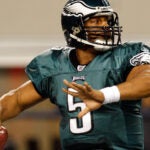 “Border to Border” will be hosted by correspondent David Noriega, who embedded in borderlands across the globe for the series to get an immersive, first-hand look at life in border regions, from political issues, conflicts and crime to the unique characters on both sides of the lines.

In total, the digital program will feature eight episodes from four borderlands: The Colombia-Venezuela border, the Kenya-Tanzania border, the Ireland-Northern Ireland border, and finally the United States-Mexico border.

Watch an exclusive clip from the Colombia-Venezuela border above, via Vice World News.