Netflix today revealed a first look at the highly anticipated new action-drama series “Vikings: Valhalla.” A spinoff of the popular History show “Vikings,” which ran for six seasons, this new series takes place a century after the events of that flagship show and chronicles the legends of some of the most iconic vikings who ever lived. Laura Berlin stars as Emma of Normandy, Sam Corlett plays Leif Eriksson, and Bradley Freegard is King Canute “the Great.”

“Vikings” began in 793 AD, but “Vikings: Valhalla” takes place at a time when the Vikings have overrun most of England and are making their way into Normandy. The teaser trailer offers a look at what fans can expect from the new show, and introduces Corlett’s Leif Eriksson who many historians believe was the first European to set foot on the continental North America.

Michael Hirst, who created “Vikings,” serves as co-creator and executive producer on this new series while Jeb Stuart is executive producer and showrunner. The series hails from MGM Television and Distribution and Netflix, and will premiere exclusively on Netflix in 2022. 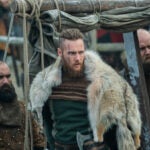 Also Read:
Why ‘Vikings’ Will Finish Run on Amazon Prime Instead of the History Channel

Netflix hasn’t yet set a firm release date for this new series beyond announcing that it will debut sometime in 2022.