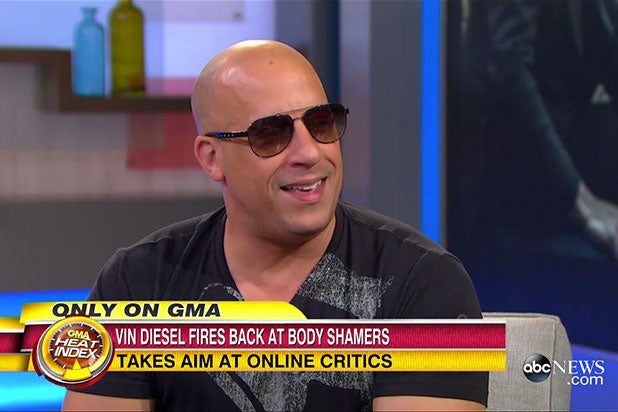 Vin Diesel has been the victim of body shaming on the Internet in recent days after photos surfaced of him with a “softer” physique than fans are used to, but the actor said he can take the criticism and online bullying.

“Honestly, I would rather it come to me than somebody else,” the actor said on Tuesday’s “Good Morning America.” “I can take it.”

“I don’t care, really,” he added when asked about the online insults he’s received. “I’m not trying to be in super shape all of the time. I’m trying to master my craft of making films.”

On Tuesday’s episode, the actor said that his recent film, the period thriller “The Last Witch Hunter,” required less time at the gym than his previous films did.

“The director kept saying, ‘You know, there’s no Gold’s Gym in the 13th century,'” Diesel said.

Diesel said he started working out as a teenager when he was a bouncer in New York City. Since then, fans had gotten used to his muscular physique and many were shocked to see a photo in which a shirtless Diesel looked a little rounder than usual, prompting people to call out his “dad bod.”

In response, Diesel took to Instagram to share a picture of himself that proves his “dad bod” is passe.

“The pic from yesterday … For those who wanted the show … For all the angels that love dad bod regardless … I will post an exclusive video on my Facebook when I’m done with press today,” the actor captioned.

In the interview with “Good Morning America,” the actor also took the opportunity to speak out about body shaming and trolling on the Internet.

See the pictures below.

Vin Diesel fans… Do NOT Google “Fat Vin Diesel“. DO NOT. Don’t. pic.twitter.com/8W5SFcJdCR

The pic from yesterday… For those who wanted the show… For all the angels that love dad bod regardless… I will post an exclusive video on my Facebook when I am done with press today. #LastWitchHunter #HappyCreative A photo posted by Vin Diesel (@vindiesel) on Oct 11, 2015 at 11:49am PDT