Vince McMahon is stepping aside as CEO and board chairman of WWE amid an ongoing investigation into claims of misconduct by himself and head of talent relations John Laurinaitis, the company announced Friday.

Stephanie McMahon, Vince’s daughter who took a leave of absence last month from her role as the company’s chief marketing officer, will serve as interim CEO and chairman.

Vince McMahon will retain will retain his role and responsibilities related to WWE’s creative content during the investigation, which involves multiple claims of sexual misconduct including a $3 million hush payment to a former employee who said that she had had a romantic relationship with him.

“I have pledged my complete cooperation to the investigation by the Special Committee, and I will do everything possible to support the investigation.  I have also pledged to accept the findings and outcome of the investigation, whatever they are,” Vince McMahon said in a statement. 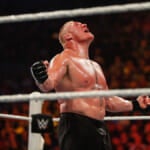 McMahon was a commentator for his father’s WWWF wrestling series when he bought the company in 1982. He centralized the regional sport, founded Wrestlemania, bought out his competitors and became the very definition of a hands-on boss, doing his own wrestling and developing the on-camera persona of Mr. McMahon, a hot-headed tyrant bent on control of his employees.

Though McMahon essentially created a wrestling monopoly, he never stopped innovating, launching WWE Network and branching into other forms of digital media, filmed entertainment and publishing.