The 7-year-old girl who went viral for her performance of “Let It Go” from a bomb shelter in Ukraine is stunning the world with another performance. This time, it’s Ukraine’s national anthem.

Amelia Anisovych is now safe in Poland, having evacuated from Kyiv, where her spontaneous performance took place from a bunker. This week, a benefit concert for her country called “Together With Ukraine”  brought together artists from Poland and Ukraine to raise funds for the aid organization Polish Humanitarian Action. Anisovych took the stage there to perform an acapella rendition of Ukraine’s national anthem.

You can watch her performance in the video here and above. 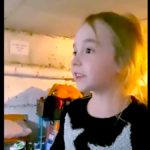 Amelia Anisovych first performed “Let It Go” from the Disney hit “Frozen” earlier this month, while sheltering in a bomb shelter in Kyiv. Her performance quickly made the rounds on social media, earning worldwide support — including from some of the “Frozen” team.

Idina Menzel, who played Elsa in “Frozen” and is the original voice behind the hit earworm, reposted the video with the message: “We see you. We really, really see you.”

Later, Kristen Anderson-Lopez, one half of the songwriting duo responsible for the song, also chimed in. 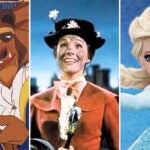 Also Read:
All 14 Oscar-Winning Disney Songs, From ‘When You Wish Upon a Star’ to ‘Let It Go’ (Photos)

“Dear Little Girl with the beautiful voice, My husband and I wrote this song as part of a story about healing a family in pain,” Anderson-Lopez tweeted. “The way you sing it is like a magic trick that spreads the light in your heart and heals everyone who hears it. Keep singing! We are listening!”

Anderson-Lopez also highlighted that the little girl was singing the song in Russian at the time, which changed up the lyrics a bit, but they were still as powerful as ever. You can check out the original performance here.