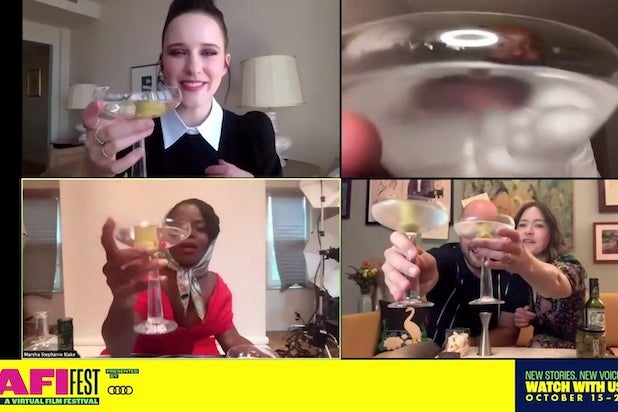 It’s an annual ritual of awards season that comes around every fall: The American Film Institute’s AFI Fest arrives, studios bring out their awards movies to showcase them in front of a Hollywood audience, and every big premiere begins at least half an hour late because there’s lots of mingling, talking and speech-making before the movie starts.

Almost all of those things happened on Thursday night, as the 2020 AFI Fest kicked off with the opening-night world premiere of Amazon’s “I’m Your Woman,” the Rachel Brosnahan-led twist on ’70s crime movies directed and co-written by Julia Hart. The movie drew a capacity crowd, AFI president and CEO Bob Gazzale offered a welcoming speech, the filmmakers and cast raised a toast and talked about their movie, and it wasn’t until almost 8:40 that the film scheduled for 8:00 actually began.

Of course, all of this happened on computer screens and TV monitors around the country rather than in the festival’s usual home at the Hollywood & Highland Center. “This year we are not bound by the constraints of geography,” Gazzale said in a speech that would normally have been delivered at the foot of the huge screen in the TCL Chinese Theatre. “While we are beaming to you from Hollywood, people from around the nation are in the seats next to you.”

This was the first virtual AFI Fest, necessitated by the COVID-19 pandemic and by the industry’s desire to find a way to showcase films at festivals and put them before voters by any means they could. “It’s very weird but very, very special,” Brosnahan said during a pre-show “cocktail time” conversation with Hart, co-writer and producer Jordan Horowitz and co-stars Marsha Stephanie Blake and Arinze Kene.

What was interesting is just how normal the new normal now seems. Of course we’re going to get a Zoom intro and pre-screening Q&A – why, isn’t that all the better to check out people’s furnishings and choice of attire? (What Funko is that on the bookshelf behind Gazzale? Doesn’t Blake look ready for a full-on red carpet, while Horowitz is in khakis and a short-sleeved shirt?)

The virtual format meant that there was more visible alcohol than a usual AFI kickoff, with the “I’m Your Woman” crew debating favorite drinks while they poured themselves martinis. And it gave everybody the same seat in the house, without the tradeoff that comes in a huge theater like the Chinese, where a good seat for the Q&A is much too close for the movie, and a seat appropriately far back from the screen puts you at a huge distance from the Q&A.

(And yes, when I said the film “drew a capacity crowd,” I meant it – the AFI Fest may take place entirely online, but there’s a cap on tickets for each screening.)

The pre-show conversation felt longer than it might have if it had taken place in person, even though it clearly showed the work of an editor, but it set up the movie nicely to hear Hart and Horowitz talk about their debt to films like Michael Mann’s “Thief,” and about how they wanted to show one of those crime stories from the point of view of a female character who is normally on the sidelines or in the shadows.

“Technically speaking, every story has been told,” Hart said. “(But) it hasn’t been told from every perspective.”

The film may not be a major player this awards season, but it made for a satisfying kickoff for the festival; as Alonso Duralde wrote in his review for TheWrap, it captures the feel of ’70s films and “refuses to follow the established paths audiences might be expecting,” while Brosnahan finds plenty of nuance in a character who can’t cook an egg, so how can she fend off hired killers?

Sure, it was hard not to miss the AFI Fest afterparty that would inevitably take over the Hollywood Roosevelt Hotel across the street after a festival screening. But maybe people have adapted by now, and have figured out how to throw their own afterparties.

Me, I had another slice from the enormous cake that Amazon sent me last week to celebrate another of its premieres, “What the Constitution Means to Me.” It wasn’t quite like mingling with Rachel Brosnahan and Julia Hart at the Roosevelt, but in these times it’ll have to do.