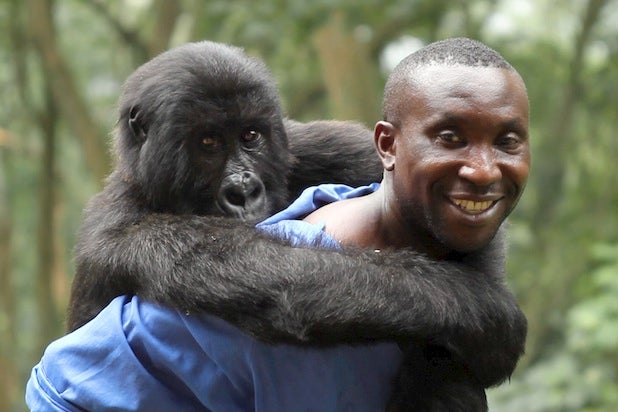 A small team of documentary filmmakers has set its sights on pushing around a huge international oil company, using a handful of mountain gorillas, a beautiful and eye-opening movie and the might of Netflix and Leonardo DiCaprio as ammunition.

“Virunga” is the documentary, premiering Friday on Netflix and opening an Oscar-qualifying theatrical run at Laemmle’s Royal on the same day. Named for a spectacular national park in the eastern Congo, where a small group of rangers have become a surrogate family to the gorillas, the film is simultaneously a touching human look at a remarkable corner of the world, a substantial piece of investigative journalism that uncovers corruption and crime in the name of an oil company trying to develop the park, and a startling close-up look at the war that at one point spills into Virunga.

When the film screened at the Tribeca Film Festival in April, TheWrap called it “at times hard to watch but in the end impossible to shake.”

And while the documentary is now getting an Oscar push from Netflix, at least partly capitalizing on the visibility of executive producer DiCaprio, it’s not in it for the money. “Virgunga” is a not-for-profit venture from director Orlando von Einsiedel and producer Joanna Natasegara, whose main goal is safeguard the park by putting pressure on the British oil company SOCO International.

In the film, people claiming to represent SOCO offer bribes in exchange for access to Virunga. Their actions, the filmmakers say, are just part of a wide-ranging web of corruption and intimidation being done in the company’s name in an ecologically sensitive area.

At Tribeca, SOCO lawyers insisted that von Einsiedel read a lengthy disclaimer in which it said that no one working for the company had ever engaged in the illegal activity depicted. That statement has now been incorporated into the film.

The filmmakers sat down with TheWrap to discuss the film, and their strategy to put pressure on SOCO.

TheWrap: The film starts out telling a wonderful story about a park ranger who becomes almost a surrogate parent to the gorillas. But other stories then start to intrude, notably SOCO and a war in the Congo. Did you start out to tell those other stories, or did they come along during the making?
Orlando von Einsiedel: The film almost mirrors the actual journey that I went on. I was drawn to the park because of the amazing transformative potential the place had to change and benefit the whole region. I suppose the initial film was going to be this really optimistic film about the rebirth of the region, about the park transforming eastern Congo through development projects and creating long-lasting stability.

But I’d only been on the ground a month or so when his new war started, and then I learned about the park’s very serious concerns about SOCO International. So it transformed quite quickly into something else entirely.

The Viriunga story is obviously ongoing – just a couple of days before Tribeca, the park’s chief ranger was shot, apparently by rebels. Was it tricky to decide when to stop filming and put the movie together?
Von Einsiedel: It was so difficult, because of exactly that. I jut kept thinking, I shouldn’t go now because something else will happen. But in the end, the pressure that the park was coming under by SOCO was getting stronger and stronger, so we really felt like we needed to finish the film and get that story out.

Also read: ‘Lemony Snicket’ Being Adapted by Netflix for Series

When the war spilled into the park and there was fighting going on around you, there must have been times when you thought, Hey, it’s great if we get the shots, but we might be killed here.
Von Einsiedel: No lie, it was terrifying. When the front line of the war moved over the park, there were several days of intense combat, and it was completely terrifying. And in every way, I was a liability. I can’t shoot a gun, the only thing I can do is film stuff.

But one day someone had been injured, and I put my camera down, because I didn’t want to film it. And a ranger said to me, “No, no, Orlando, you need to tell the story of what’s happening here. You should film this guy.” The one contribution we can make as filmmakers is to keep following that story.

You’re a liability in the moment, but an asset in the long run.
Von Einsiedel: Yes. We haven’t released the film yet, but we’ve already started to see impact from what it’s been doing. It’s put the SOCO story out there, and people have become very interested. Global Witness has released a report, Human Rights Watch has release two reports about what’s been going on there.

This is a billion-dollar oil company. We’re a tiny team, the rangers are a small team. These guys are much bigger than us, but the strategy is working. So it’s very inspiring to see that, and we want to keep telling everyone who watches this that we can do something to protect Virunga for the long term.

What has SOCO done besides issuing a statement that their employees weren’t involved?
Von Einsiedel: Not a single thing. Frankly, we’re all appalled that they haven’t adequately addressed the allegations against them.

Natasegara: And there was a very big report by a UK newspaper recently, with allegations even more serious than the ones that we found. There are allegations of murders in association with people who are working or claiming to work with SOCO. And their response was, “Nothing to do with us.”

Von Einsiedel: The deputy CEO said, “Do you think those are the only two people murdered in Congo?”

Natasegara: Yeah, “Murders happen all the time in that region. It’s not our responsibility.” So we really stand by this allegation of lack of oversight. It sounds like a quite unsexy allegation, but it’s a very important one, and one that is the benchmark for corporations working in difficult areas. If you cannot have oversight over what is happening in your name in a region, then you shouldn’t be working there at all.

What is their presence in the park like now?
Natasegara: On their website, they claim that they still have a presence for social programs and environmental assessment, which is essentially exactly what they were doing during most of the investigation. But a lot of people are now working against them, and we think we can use the film to highlight the work of those people.

Von Einsiedel: Just to add, all the proceeds from the Netflix deal go back to the park, and we’re continuing to work for as long as it takes to secure the park for the long term.

Natasegara: What’s exciting is that we’ve had a relatively small audience so far, and already the film has created some kind of a stink. So we’re hoping that once it hits the big Netflix, things will move faster.

Von Einsiedel: We’re really interested to see what happens when it goes out to 50 million homes.

What’s the current political and security situation in the park?
Von Einsiedel: Since we finished filming, the security situation has improved dramatically. The M23 rebel group was pushed out, and gorilla tourism has reopened. So your readers can go and have a holiday in Viringa. It’s amazing, and a really good way to directly benefit the park. And all of the development projects that started before the war are fully going. Hydropower projects, fisheries, agricultural efficiency projects, they’re all plowing ahead.

So in a lot of ways, it’s incredibly positive. But the oil issue is hanging over everything like a dark cloud.