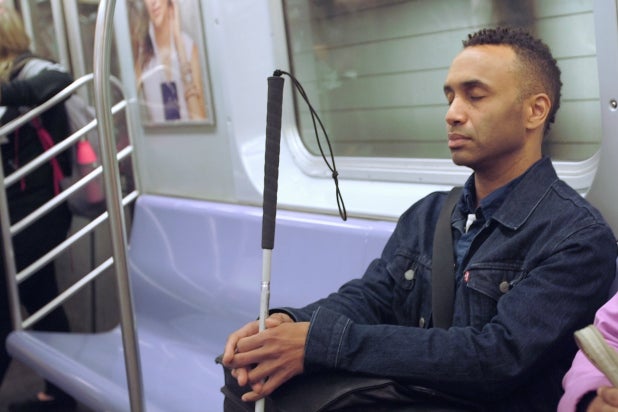 It would be understandable if independent filmmaker Rodney Evans (“Brother to Brother,” “The Happy Sad”) turned inward to deal with a life-changing medical diagnosis like retinitis pigmentosa. After all, the disease, which has destroyed 80% of his visual field thus far, has the potential to severely limit not only his everyday life, but also his life’s work.

Instead, however, this imposed limitation inspired him to seek out new forms of perception. Initially, he had planned only to interview other artists who have grappled with visual impairment. But eventually, he decided that his own journey was an important element of the story — or, as it turns out, multitudinous stories — he wanted to tell.

So Evans intersperses his own experience with those of three others, finding comforting commonalities and essential differences. The result is artistically uneven in structure but emotionally powerful throughout.

Also Read: 'In the Dark' Producers Explain Why They Didn't Cast a Blind Actress in the Lead Role

John Dugdale is an accomplished photographer who lost his eyesight due to both AIDS-related complications and tragic medical neglect. But like the other subjects, he has little use for resentment. He is far too busy trying to transfer a seemingly endless font of ideas and images into the world.

His photographs, which he creates with the help of assistants, are stunningly evocative. His desire to communicate, however, extends much further. He talks and talks and talks, almost physically urging us to widen traditional scopes of expression.

Ryan Knighton chooses his words more precisely, and just as effectively. Like Evans, he found his world contracting due to retinitis pigmentosa, which in his case was diagnosed while he was a teenager. He eventually sought freedom in a writing career, and we can see his gift in the funny, articulate way he analyzes his passion for punk rock.

The film’s most moving segment, though, arguably belongs to Kayla Hamilton. A young dancer who has only minimal peripheral vision in one eye, Hamilton exudes the sort of intelligence and warmth that inspires an immediate connection with audiences. Evans brings us into her choreography sessions as she works on a solo dance piece, exploring not only what it means to be a visually impaired person but a black female artist in the 21st century.

Also Read: Study: Blind People Watch TV About as Much as Sighted People

Evans weaves his own multifaceted experience into these mini-biographies throughout “Vision Portraits,” with mixed success but consistent sincerity. We follow along as he navigates spaces ranging from a crowded subway platform to an overseas medical office, where he’s hoping a last-ditch procedure might help. His straightforward documentary approach alternates with snippets of his own poetry, and experimental imagery that evokes visual limitation.

But in the end, it isn’t the visuals that make the biggest impact. It’s the vast range of perspectives from Evans’ thoughtfully chosen subjects, who express themselves with uniform generosity and unfettered individual eloquence.