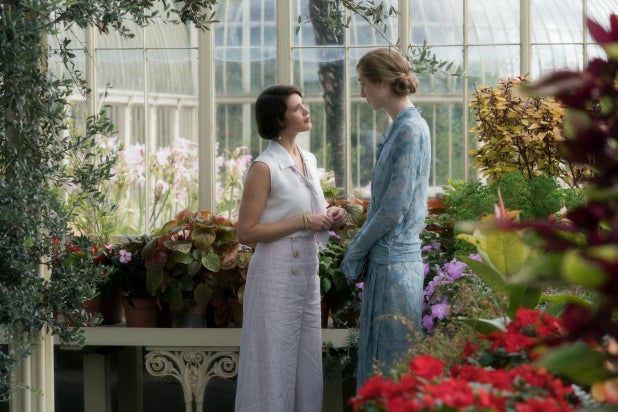 It’s always extra frustrating when a biopic falls short, especially if its subject is as compelling as the relationship between two brilliant iconoclasts like Virginia Woolf and Vita Sackville-West.

It’s a shame, too, that many in the audience will get their introduction to Sackville-West via “Vita and Virginia.” In reality, she was an extraordinarily complicated, trailblazing bisexual writer who lived on her own terms regardless of the price to herself or others in her orbit. Here, she comes across as a spoiled and superficial narcissist who is merely, as one character intones amid the film’s plethora of plummy accents, “rahthah hard work.”

As played by Gemma Arterton (also an executive producer), Vita is pure seductress: gorgeous and tempestuous and shockingly modern even by the most decadent standards of 1927. She’s irresistible, in other words, for the contemplative, always-questing Virginia (Elizabeth Debicki, “Widows”). But Virginia’s Bloomsbury set isn’t as easily swayed. They have a tight-knit group, and just because Vita sashays confidently into their bohemian world, she doesn’t necessarily belong.

She is, despite her scandalous novels and daringly outré lifestyle, as much aristocrat as artist. This doesn’t sit well with the literary crowd. But she seems oddly certain that all the emotionally unstable Virginia needs is, well, more Vita in her life.

Things are no better on Vita’s side. It’s true that her husband, Harold (Rupert Penry-Jones, “The Strain”), has his own same-sex relationships outside their marriage. But he also adores his wife and can’t stand seeing her fall in love with someone else. Moreover, as a high-profile diplomat, he knows the importance of discretion. As everyone reminds her, Vita caused enormous scandal through her last, very public affair with a woman. In fact, her mother (a terrifically monstrous Isabella Rossellini) has threatened to take Vita’s children away, to preserve the family reputation. But Vita wants Virginia and will not be denied.

Because Arterton portrays Vita with an almost adolescent superficiality, her fixation on Virginia never feels like more than a conquest, or a rung to be climbed on the literary ladder. In actuality, the two had a years-long relationship, which deeply impacted them both personally and professionally.

As in Eileen Atkins’ stage play, which inspired the movie, she and co-writer-director Chanya Button (“Burn Burn Burn”) make heavy use of literary materials, including the women’s letters. But Button can’t quite find a way to integrate them properly, so their romantic declamations often come across as baroque playacting. Only Debicki, performing on another level altogether, is able to convey true intellectualism and romantic love in convincing fashion.

Though Button struggles to get a handle on Vita, she too does better by Virginia. The writer’s mental anguish is suggested via CGI tricks — a flock of crows, rapidly-spreading ivy, ominously rising water — that only Woolf can see. These are used sparingly enough to make an impact, in contrast to a consistently melodramatic score (from Isobel Waller-Bridge, “Fleabag”) that undermines Debicki’s thoughtful restraint.

There are other pleasures, though, including careful set design from Noam Piper, Therese O’Leary and Lorna Mugan’s stunning period costumes. But the overall effect remains more “Downton Abbey” than Bloomsbury. See it if you want to wallow in Jazz Age atmosphere. But first pick up a copy of “Orlando,” the masterpiece Virginia wrote in tribute to Vita.