Lin-Manuel Miranda in the animated musical “Vivo” plays an adorable-looking kinkajou, or a “honey bear” native to the rain forest. And he’s been tasked with delivering a song and a love letter to a music superstar played by Gloria Estefan.

This first trailer for “Vivo” comes from Netflix and Sony Pictures Animation, and the film features new songs from the “Hamilton” creator as the kinkajou also named Vivo as he travels across the world. He teams up with an energetic tween girl to help him get to Estefan’s character and deliver a song that will change the world and help reconnect two former partners. 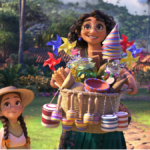 Also Read:
‘Encanto’ Trailer Introduces a World Where Everyone Has Special Powers – Except One (Video)

Kirk DeMicco (“The Croods”) directs “Vivo,” which is co-directed by Brandon Jeffords and written by “In the Heights” writer Quiara Alegria Hudes.

“Vivo” will be released through Netflix on August 6. Check out the first trailer here and above.