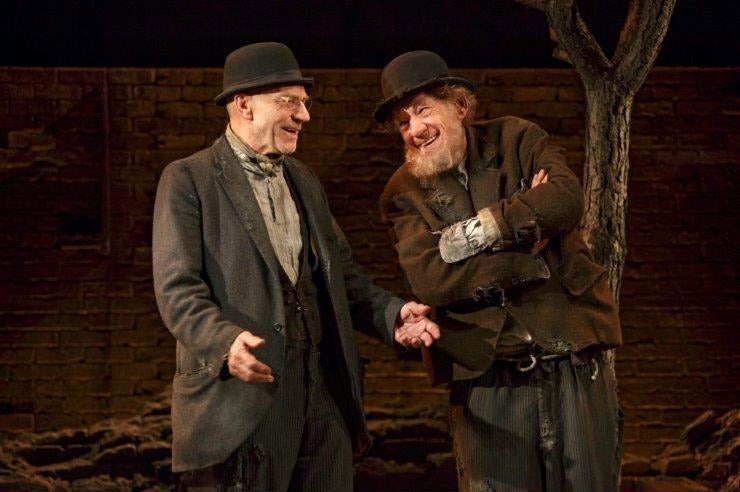 Ian McKellen and Patrick Stewart bring their considerable comic talents to two existential angst-ridden classics, Samuel Beckett’s “Waiting for Godot” and Harold Pinter‘s “No Man’s Land,” which opened Sunday at the Cort Theatre and now play in repertory. For sheer laughs per minute, these two stars deliver the goods as if they were instead performing a farce by Alan Ayckbourn or Christopher Durang. And while that light touch works for “Godot,” it ultimately becomes a distraction in “No Man’s Land.”

McKellen and Stewart, who spend more time looking at the audience than at each other, are stars because they show us their formidable technique. They don’t make acting look easy. We see all the effort, all the comic setting up. They signal what they’re about to do, which can make the pay off a lot of fun.

Being a showoff works well for “Godot,” especially as envisioned by director Sean Mathias, who has set the play in the ruins of an old theater, where a big tree has sprung up through the boards and could provide the perfect exit if only these two old hams from vaudeville or the music hall or two-reelers could find enough strong rope to hang themselves.  McKellen and Stewart are a very carefully orchestration study in contrasts here. As Estragon, Stewart is staccato and all sharp edges, his dome almost polished to a point on top. McKellen, on the other hand, seems to be sprouting hair everywhere to the point of looking furry, if not fuzzy.

Actually, his Vladimir doesn’t come into sharp focus until he has an audience, which isn’t us but rather that far more odd couple of the theater, Lucky and Pozzo. Billy Crudup is appropriately icky as the masochistic Lucky, but Shuler Hensley delivers a rather benign Pozzo, which misses the point.

The costumes of Stephen Brimson Lewis (he also designed the set) reference a burnt-out Bozo the Clown and a faded harlequin for Pozzo and Lucky, respectively. Since “Godot” is replete with theater references anyway, there’s a redundancy at work in Mathias’s vision that, after intermission, may leave you waiting for the final curtain while the characters are on stage wait for Godot.

McKellen mines laughs in “No Man’s Land” where none exist. Watch him, at age 74, get down on his knee to tie one shoe lace, only to perform a nimble bent-knee leap to tie the other. Audiences may find that his verbal and physical dexterity makes for a lighter, more digestible night at the theater, but it also diminishes the desperation that drives Spooner, a down-and-out poet, into the no man’s land of another writer’s well-appointed, servant-infested manse.

Stewart gives a fascinatingly curious performance. With just a bit more vibrato, he could be channeling John Gielgud, who played Spooner, not Hirst, in the original production of “No Man’s Land.” Stewart’s gray-blond wig even resembles the one Gielgud wore in the BBC taping of the play.