Mark Boal has been talking about “The Hurt Locker” for months now, and he’d really like to get back to work on his new screenplay. But when you’ve written (and co-produced) one of the best movies of the year — a tense, wrenching Kathryn Bigelow-directed action drama that came out in June but will clearly be in the thick of the awards race into next year — there’s always more work to do.

So Boal, a mid-30s journalist who covered conflict and culture for Rolling Stone, Playboy and the New York Times before writing the screenplays to “Hurt Locker” and “In the Valley of Elah,” submits with a resigned good humor to his promotional chores.

Spoiler alert: Toward the end of the interview, after the page break, we talk about an event that happens early in the film. If you haven’t seen it yet, consider yourself forewarned … but if you like movies and you haven’t seen the film yet, what are you waiting for? (Below, Jeremy Renner in "The Hurt Locker"/Summit Entertainment.) 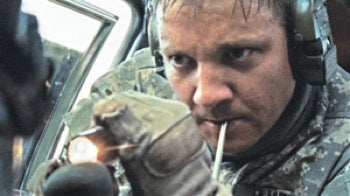 Writing about the bomb squad in Iraq for Playboy, was there a point when you decided it should be more than just a magazine article?
I don’t remember exactly when, but yeah, I felt it was a big enough story that it warranted more. Even while I was there, I was thinking there was way more than I could fit into the piece. And on a selfish level, I thought that as long as I was risking my life out here, maybe I should try to parlay it into something else.

It really became more than just a notion after the piece came out. I probably shouldn’t admit this, but I thought the piece would have a little bit more impact than it did. I wrote the piece and thought, I totally scooped everybody. When this comes out, there’s going to be a flood of stories about the bomb squad.

And then nothing … until the movie came out.

Why do you think the piece didn’t get more attention? 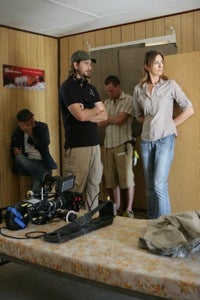 Maybe it wasn’t a good piece, or Playboy wasn’t read in the way I thought it was. But also, the coverage at that time was not about the futility of conflict. Nobody was writing about the logistical folly of saying, “We’re gonna have 20,000 troops in Baghdad, a city of millions of people, and they’re gonna chill everything out.”

As soon as you got there and walked around, you could see it couldn’t possibly work. I mean, the enemy is not identifying themselves as the enemy, and nobody in the U.S. military speaks the language, and they’re not fighting you in a conventional manner – they’re just planting bombs and walking away.

It just seemed, on that very nuts and bolts level, doomed. The coverage didn’t seem to be acknowledging that, and Rumsfeld was like, “There’s some dead-enders, but we’re gonna sort this out any day now.” It just seemed like there was still a big story to tell. (Left, Boal with director Kathryn Bigelow/Summit Entertainment)

And yet one of the reasons people have responded to the movie is that it never explicitly comes out and makes those arguments about the futility of conflict in Iraq.
Right. I have to say, I learned that from magazine editors, guys who rapped me on my knuckles and said, “Show it, don’t say it.” And also, by the way, the idea was to make it naturalistic. You can take some fictional liberties to tell the story, but you can’t have one soldier turn to another and say, “You know, this situation reminds me of early Vietnam. It’s a classic case of an overreaching global, colonial power sitting on top of a local population that resents them and that will gradually eat away at their reserve until they leave in humiliation.”

That might work in a movie like “Platoon,” which is pitched at a more operatic level, but this movie is not pitched that way.

Oliver Stone’s arguments in “Platoon” are certainly more explicit than yours in this movie.
I think so. But also, I think it’s a more complicated argument now, and a different time.  Movies like “Platoon” were all about how war took innocent men and dehumanized them in the brutality and horror of combat. I went to Iraq with all that stuff in my head, and the conceptual revelation I had is that this is a different army, a professional, volunteer military in a post-Vietnam era.

It’s a different psychological matrix you work when when you’re dealing with people who know they’re going to be in combat, who in some cases look forward to that. You can’t really argue that they’re innocents who didn’t know what they were getting into.

And also, I love Oliver Stone and he’s a genius, but those are not my favorite moments in “Platoon,” anyway.  So I never aspired to go down that road. The movies I really studied for this were more like “Taxi Driver” than “Platoon.”

Why “Taxi Driver”?
I’ve never really talked about there being any similarities in the two movies, but I looked to it because I wanted to do a character piece, and to me that’s a great character piece. That’s one de-centered male character study, and this is another. So I thought, it seemed to work for that guy, how did he do it? At one point I probably could probably have written out the “Taxi Driver” script from memory. (laughs)

I tried everything I could when I was trying to write this script, but mostly I ended up studying the scripts of other movies I liked, like that one. I did a lot of drafts, failed a lot. Wrote things, showed them to people, got feedback, tried again.

It must have helped that you’d done a previous script, “In the Valley of Elah.”
“Elah” gave me the confidence to do this. I always had a sense in my head of how I wanted this script to be, but I didn’t have the means to get there. That was the hard part. It wasn’t like a magazine article, where I had the notepad and I could look back and find a quote to put in. This time, it was exhilarating to say, I can be the writer and make something up. Exhilarating and fun and scary. And Kathryn was a big help along the way, encouraging me with every new Frankenstein version of the script I wrote.

The movie doesn’t have the usual three-act structure – instead, it’s very episodic, moving from one bomb-defusing incident to the next without any big character arcs. Was that an attempt to capture the nature of your experience in Iraq?
It’s a grind, and I wanted to capture the daily grind without boring the hell out of the audience. If you’re in the bomb squad, you wake up at eight o clock in the morning and go face death. Go back, have lunch, and then go out and do it again. Take a nap, go out at three and do it again. When I was there, they did it 10, 12 times within a 24 hour period, because there were so many bombs.

So yeah, the episodic structure was an attempt to capture that reality, and to also give a kind of framework for the kind of piece I wanted to do. With the James character, I wanted to do a character study without relying on three big dramatic events where he changes.

I wanted your interpretation of him to change, but he’s basically the same human being at the end of the movie that he was at the beginning, and the only change is that you’ve realized he’s different from what you thought he was, and maybe more complicated, and maybe has a set of motivations that you hadn’t considered before. And to do that, the episodic structure helped.

Your script also does something that’s pretty rare, and pretty startling, which is to kill off somebody the audience might think is a main character in the first 15 minutes.
That’s true. There’s some pretty well-established cinematic traditions of doing that, though.

Hitchcock, for instance.
Yeah, he did that to great effect. so there’s that precedent to steal from. Strangely, you’re the first person that’s mentioned that. Every time people ask about it, I say, "I don’t know, it just came to me."

At that point in the movie, you’re playing with the audience a little bit, because they don’t know who the main characters are going to be.
Exactly.  Part of the story here is that the writing of the film and the casting of the movie were two separate processes, but they were part of the same philosophy. From the beginning, when Kathryn and I were talking about it, the goal was to do a very, very realistic movie. That was my goal, to put you in the shoes of the soldier, make you feel like you’re there to see what I saw, or some better, more interesting version of what I saw — or, in some cases, a less gruesome version.

But it was never "We’re going to get Tom Cruise for this role!"  It was always, "We’re going to play with audience expectations by getting three actors that you don’t know." Writing it, I knew that was part of the intention. It wouldn’t have worked if we had a big star in the A part.

So are you ready to keep talking about the movie through awards season?
Oh, god. This is it, right? This is the last one?

Sure. I promise you won’t have to do any more interviews after this.
That was the idea. I have to say, I’m perversely curious about the awards stuff now that I’m involved in it, now but I know nothing about it. And the schedule is staggering. I don’t know if I’m gonna make it, man. I feel like I’ve been in Hollywood for five minutes, and I’ve got another script I’ve got to write.

I’m not the kind of guy that can enjoy a victory lap in the best of circumstances, and one that’s fraught… (laughs) I mean, it is fun and exciting for the most part. But I don’t know how I’m gonna stay sane through January.