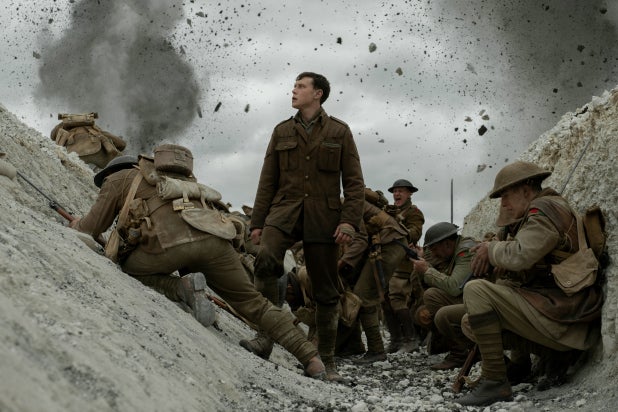 Sam Mendes’ immersive World War I epic “1917” was finally unveiled for awards voters and press on Saturday in New York and Sunday in Los Angeles, and this year’s awards race has now changed dramatically.

Far more than Clint Eastwood’s “Richard Jewell,” which premiered at the AFI Fest on Wednesday, “1917” appears to be a strong contender, maybe even a frontrunner, in a host of categories, definitely including Best Picture and Best Director but also Best Cinematography, Best Original Score, Best Production Design and plenty of other below-the-line categories.

I’m not ready to predict a Best Picture win after seeing it on Sunday morning, but I would place it in the top four likeliest nominees, alongside “Once Upon a Time … in Hollywood,” “The Irishman” and “Parasite.” And given the uncertainties of this year’s race, I think it might have a pretty good chance of becoming the first late-breaking film to skip the festivals and still win Best Picture since “Million Dollar Baby” in 2004, and the first war movie to grab the top Oscar since “The Hurt Locker” in 2009.

Reviews are embargoed until Monday, but it’s safe to say that “1917” is both a wrenching emotional experience and a technical tour de force in a way that will force voters to pay attention.

Yes, it’s a war movie, which conventional wisdom says is a genre that appeals more to men than women. (“Ford v Ferrari” is supposed to be a guy’s movie, too, but it’s playing extremely well across the board.) And yes, it’s sometimes hard to watch the brutality of war as it’s encountered by two young soldiers played by George MacKay and Dean-Charles Chapman, as they embark on a near-suicide mission to bring a vital message to the front lines.

But the tears in the Arclight Hollywood on Sunday afternoon and the raves on Twitter all weekend suggest that Mendes’ film is more universally appealing than the war-movie label might suggest.

It’s also a marvel of craftmanship, starting with cinematography legend Roger Deakins’ work. The film is shot in what is designed to look like one continuous take, and for most of the film I figured he was a shoo-in for a nomination based on the intricate camera movement alone. But then comes an extended sequence shot in a burned-out French town that is as staggering visually as anything Deakins has ever done, making it hard to envision anyone else winning in that particular category this year.

Deakins finally won his first Oscar in his 14th nomination for “Blade Runner 2049” two years ago, which might have passed the mantle as the most-nominated and most-deserving person never to win to composer Thomas Newman, who also has 14 nominations. Newman’s alternately disquieting and rousing music to “1917” will also certainly be his 15th, and ought to give him by far his best chance at an Oscar win.

In other below-the-line categories, the film will no doubt be extremely strong, with the only question mark, perhaps, coming in editing. There, it could fall victim to the same question that hurt “Birdman” five years ago: If a film looks like it was done in a single shot, doesn’t that mean the editor had less to do? (Highly respected editor Lee Smith, who won the Oscar for “Dunkirk” two years ago and also edited this one, might beg to differ.)

Given the across-the-board achievements of the film and the daring way it was constructed, Mendes will certainly be in the top rank of Best Director contenders, alongside Martin Scorsese for “The Irishman,” Quentin Tarantino for “Once Upon a Time … in Hollywood” and Bong Joon Ho for “Parasite.” That field is very crowded this year (other contenders including Noah Baumbach for “Marriage Story,” Greta Gerwig for “Little Women,” Taika Waititi for “Jojo Rabbit,” James Mangold for “Ford v Ferrari” and Pedro Almodovar for “Pain and Glory”), but it’s hard to imagine that “1917” will get serious awards consideration without Mendes being at the center of it.

The real questions, perhaps, are in the Best Original Screenplay category, where high-octane films often get overlooked, and in acting. Though the cast also includes Colin Firth, Benedict Cumberbatch and Mark Strong, it really is a two-person story with MacKay and Chapman. MacKay has more time on screen (which is to say that he’s in almost every shot), and he has to be considered a real Best Actor contender — but he’s also competing in a year in which Leonardo DiCaprio, Robert De Niro, Joaquin Phoenix, Adam Driver, Antonio Banderas, Jonathan Pryce and Eddie Murphy are in the thick of the race, and it may not be easy for him to fight his way through that crowd.

In the Q&A that followed the Arclight screening, the first of four that he would do in Los Angeles on Sunday, Mendes talked about how the film grew out of stories he heard from his grandfather, who was used as a messenger between sentry posts in World War I. “For some reason, the image of one man carrying a message through that war stuck with me,” he said.

The point of casting relative unknowns as the two leads, he said, was to give the audience the initial impression that these two young soldiers were “two among millions,” and let their heroism come slowly rather than be expected.

As for the idea of letting the film unfold in what appears to be a single shot, Mendes said, “When I had the idea, it was to let the film play out in two hours of real time — but how do I make an audience emotionally connect? The technical challenges seemed to be dwarfed by the emotional payoff of not leaving the two characters’ sides.”

The strategy paid off with audiences on Saturday and Sunday. It seems destined to pay off with voters, too.