President Joe Biden will make his first remarks to the nation after the U.S. Supreme Court overturned Roe v. Wade this morning. Biden is expected to begin speaking around 12:30pm ET/9:30am PT and you can watch his speech live in the video above.

The U.S. Supreme Court on Friday overturned a 50-year-old precedent set by the landmark 1973 Roe v. Wade decision that established a constitutional right to abortion, allowing individual states to decide how much access women have to the procedure.

In Justice Samuel Alito’s 5-4 majority decision, Dobbs v. Jackson Women’s Health Organization, the court voted to overturn the constitutional right to an abortion. He was joined by Clarence Thomas and the three justices appointed under Donald Trump — Neil Gorsuch, Brett Kavanaugh and Amy Coney Barrett. Meanwhile, Chief Justice John Roberts voted to uphold the 2018 Mississippi law, which bans most abortions after the first 15 weeks of pregnancy, but did not join in overturning Roe. 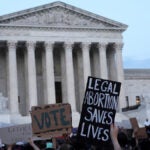 Former president Barack Obama released a statement earlier on Friday, saying “Today, the Supreme Court not only reversed nearly 50 years of precedent, it relegated the most intensely personal decision someone can make to the whims of politicians and ideologues — attacking the essential freedoms of millions of Americans.”

The Supreme Court’s new decision will have a sweeping and immediate effect as more than a dozen states have even more restrictive laws that will be triggered by the ruling, and another 10 states have pre-Roe restrictions they could revive. In addition, some states have moved to enact legal impediments for its citizens to seek abortions in other states — and even to punish those who facilitate such actions.