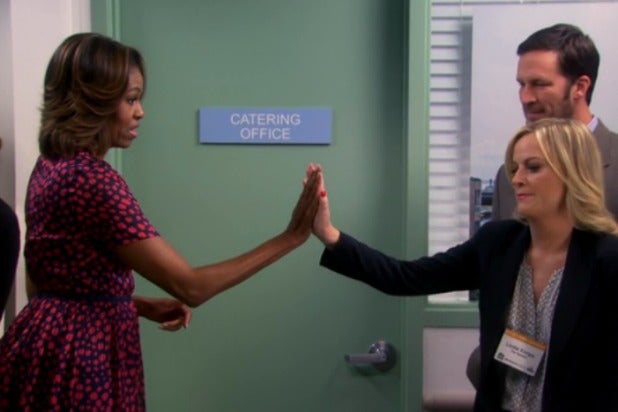 Amy Poehler said last week that “Parks and Recreation” fans should look for a big surprise in the season finale’s final moments — and it turned out to be a three-year flashforward that finds her character, Leslie Knope, guiding the Midwest’s national parks from a third-floor office in Pawnee.

One of her underlings is Jon Hamm, whom she immediately fires. Knope took the job after a quick run-in — and awkward high-five — with first lady Michelle Obama. But she did it on the condition that she remain in Pawnee instead of moving to Chicago.

Also read: ‘Parks and Recreation’ Star Nick Offerman On What It Takes to Be a Man (Video)

The flash forward also saved “Parks” viewers from dealing with three difficult years of Leslie and Ben taking care of their triplets. They arrived at her office looking adorable, able to walk, talk, and eat things they shouldn’t.