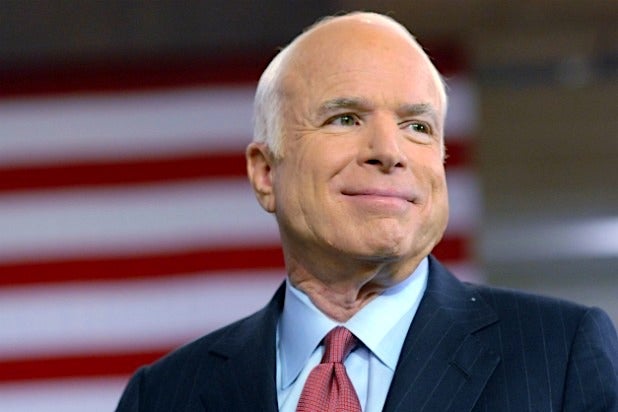 Sen. John McCain knew his end was near when he spoke to “Watergate” director Charles Ferguson for Ferguson’s documentary about “how we learned to stop an out-of-control president.” The director believes McCain wanted to send a message about President Trump.

You can listen to our “Shoot This Now” podcast with Ferguson (who also directed the Oscar-winning “Inside Job”) on Apple or right here:

We asked Ferguson if he thought McCain was trying to send a message, through the documentary, that you can take down an out-of-control president.

“Absolutely. No question. I very deliberately did not ask him about Donald Trump,” Ferguson said. “For similar reasons, the name Donald Trump does not appear anywhere in the film. There’s no direct allusion to our current situation. But it was very obviously on Mr. McCain’s mind.”

Ferguson’s four-hour film enjoyed an Oscar qualifying run in theaters before its debut tonight on the History Channel. It has the alternate title, “How We Learned to Stop an Out-of-Control President.”

Ferguson hasn’t needed to link Nixon to Trump, because many viewers have drawn their own parallels.

Ferguson’s film offers a shaded, nuanced and surprisingly funny record of Nixon’s fall. Like last year’s “OJ: Made in America,” it starts with captivating details that establish a strong backstory before it dives into a narrative we all think we know well.

Ferguson said he wished he could have included more detail about McCain, especially when the film delved into how Vietnam pre-determined many of the failures of the Nixon presidency. Ferguson noted that McCain, who was shot down and held captive for six years, credited Nixon with bringing him and other POWs home in 1973.

“He felt an enormous debt of gratitude to Richard Nixon for bringing him and those prisoners back,” Ferguson said.

But McCain famously feuded with Trump, who once said of McCain, “He’s a war hero because he was captured… I like people that weren’t captured.”

In one of McCain’s last acts as a senator, he voted to kill his party’s attempt to repeal the Affordable Care Act, aka Obamacare. It was a significant setback for Trump.