Spoiler alert: The following article discusses details of the “Wednesday” finale, titled “A Murder of Woes.”

Netflix’s “Wednesday,” a new series exploring the teenage life of the title Wednesday Addams (Jenna Ortega), is equal parts murder-mystery and homage to the macabre comedy from which it draws its lore. In crafting the show for Netflix, co-creators and co-showrunners Alfred Gough and Miles Millar wanted to immerse the beloved taciturn Addams character into a boarding school dedicated to outcasts like her, keeping the “ethos and the feel of” the franchise as they delved into the implications of bringing Wednesday into the social media age.

But is the “Wednesday” finale really the end, or will there be a “Wednesday” Season 2? We got the skinny from the show’s creators, but first a recap of where things ended.

At Nevermore Academy, where she is thrust after executing a deliciously vindictive plot involving piranhas and “normie” high school bullies, Wednesday must navigate new and treacherous terrain; while adapting to the boarding school’s supernatural social ladder, the amateur sleuth embarks on a journey to uncover a reclusive monster preying on the local townspeople, all while juggling an unforeseen prophecy involving her ancestors, the mysterious circumstances surrounding her parents’ time at Nevermore and, well, just regular relationships with the people around her. 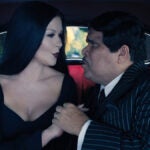 Also Read:
‘Wednesday’ Cast and Character Guide: Who Plays Who in the Netflix Series? (Photos)

At the end of the dark comedy’s eight episodes, all of the loose threads seem to be woven together — almost: It turns out that resident tortured artist Xavier (Percy Hynes White) is innocent, with Tyler (Hunter Doohan) chillingly confessing his real identity as the Hyde to Wednesday. The final twist reveal features Christina Ricci’s Ms. Thornhill as the disappeared daughter of the Gates family, Laurel, who had cunningly been pulling the Hyde’s strings all this time in her quest to rid Jericho of outcasts. That’s where the prophecy comes in, as Laurel succeeds in resurrecting Joseph Crackstone, a settler who colonized the town centuries ago and massacred outcasts en masse. With the help of her ancestor Goody, Wednesday is able to regain her strength after a near-fatal injury to save both the town and Nevermore.

All’s woe that ends woe, as Tyler is likely locked away thanks to Enid’s (Emma Myers) first-time wolf-out, Thornhill is thwarted via a thousand bee stings courtesy of Eugene (Moosa Mostafa) and Xavier is cleared of all charges. With the end of the school year and the death of Principal Weems (Gwendoline Christie, who said she feels her journey “cannot possibly be over”), Nevermore will look to rebuild, heal and move on in the following term. A final click-clack of Wednesday’s typewriter, where she spells out “The End?”, and an apt parting gift from the infatuated Xavier — an iPhone — bids the character, and seemingly the neo-Gothic world she occupies, goodbye. 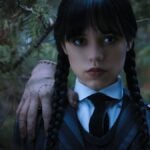 But then, a final message from an unknown contact sends Wednesday two eagle-eyed images of her — one with Tyler at Weathervane and another with Xavier showing her receiving the very phone she’s currently holding — along with the message “I’m watching you 👀.” The last message the audience glimpses is a GIF caricature of her, signature braids and uniform, that’s comically murdered by a butcher’s knife to the head, replacing her eyes with crosses and spilling the background with blood.

What could it all mean? The executive producers are down to unravel a further conspiracy, if given the chance by the streamer to make “Wednesday” Season 2 (a likely bet given the series’ audience and critical favor, revered IP and the Tim Burton of it all).

“It’s open-ended,” Millar told TheWrap when asked if the door is open for a potential second season, “but if it’s eight it’s eight. But hopefully we get to continue the story for many seasons to come.”

It’s worth noting that Netflix has not officially ordered a second season of “Wednesday,” and likely won’t until more viewership data is in, but if the streamer decides they want more, the show’s creators are eager to continue telling more stories.

All eight episodes of “Wednesday” are currently streaming on Netflix. 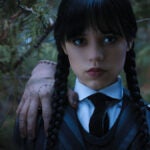