The first documentary ever shortlisted for Best Visual Effects, “Welcome to Chechnya” beings with a disclaimer acknowledging its use of movie magic: “For their safety, people fleeing for their lives have been digitally disguised.”

The film by director David France (2012’s Oscar nominee “How to Survive a Plague”) is a chronicle of the violence against the LGBT population in the Russian republic of Chechnya. Because being exposed as gay is punishable by torture or death, 23 individuals seen in the film had their faces masked in post-production with the faces of volunteers.

Visual effects supervisor Ryan Laney (‘Ant-Man’) filmed the anonymous volunteers at a Brooklyn studio using an array of nine cameras to data capture their range of expressions. Laney then spent a year at an undisclosed location in California, doctoring the original footage.

France and Laney spoke to TheWrap about making the historic project, days after the Oscars announced that the film had been shortlisted in the categories of Best Visual Effects and Best Documentary.

TheWrap: First of all, congratulations making the shortlist for Best Visual Effects. What was your reaction when you heard?

RYAN LANEY: I was baffled in the moment, just because I thought of what we did as more “supporting” effects. But I do understand the value of what we did and it was challenging work. It’s wonderful that others saw the value as well. The Oscars are the Academy of Motion Pictures Arts and Sciences, and this is a move that’s helping the art through science.

DAVID FRANCE: I was proud of the Visual Effects branch for seeing it and recognizing what Ryan accomplished. And what he did really revolutionizes documentary filmmaking and created a great new tool. I was thrilled that the industry understood the significance of it.

It’s a rare movie that announces the visual effects in its very first words. Was that always the plan, to be completely open?

LANEY: Yes, we tried to make it obvious who was covered digitally and who wasn’t. There was a lot of conversation around media integrity and journalism. We wanted an honest translation of emotions, but we didn’t want to alter the footage in any way that could mislead the audience. So we talked about what the opening disclaimer would say. And there were several rounds on how we would show the effect.

Also Read: 'Welcome to Chechnya' Director on the Dangers of Filming LGBT Documentary

How did the effect evolve as you talked more about it?

LANEY: We went back in and we added some softness, a bit of a halo around the face, so that the audience would connect it to what we call the FBO, which means “fancy blurry oval.” When you see blurry oval over a face, it’s a visual language. You know this person is being protected. We didn’t want to lose that connection. These are witnesses and they’re putting themselves on the line in order to tell the story. That was a very important part.

So those times when there’s blur around the face, that’s deliberate?

LANEY: Absolutely, yeah. For the first 20 shots we went back in and turned the blur up. To help acclimate the audience to it. There was always an “underblur” in the composite, which was there on purpose. Perhaps on some streaming services it doesn’t show up as well, but our idea was that if an audience had any question, they would know. It’s obvious that this person is covered up.

What would you compare this to, in terms of the power of the technique? Some have mentioned the aging and de-aging process that Martin Scorsese used in “The Irishman.”

LANEY: “The Irishman” was amazing work, but their goal was to create believable characters. On a normal effects project, the goal is to fool the audience. That wasn’t ours. So we had to reengineer our own expectations for a different set of requirements. It was a strange question to ask ourselves: How do we produce effects that are obvious and still create good work?

The film has also been mentioned in the same breath as “deepfake” videos, digital mimicry of people without their knowledge.

FRANCE: Yes, but this is just the opposite. Ryan and I both felt very strongly that everybody involved should be totally consenting, including the audience. We wanted the audience to know what we’d done and we wanted everyone to be engaged in the protection of these individuals. That’s why we cranked up the effects. We’re not at all inviting further danger to these individuals. And we’re not tricking anyone.

LANEY: Also, there’s a really honest translation of emotion in what we tried to do. We have seen the original footage and it’s so fantastic how well the subtle emotions can convey the same message, even thought it’s a different face.

And this isn’t like layers of paint that could be stripped off, right? There is no way to decode the effects?

LANEY: Correct. In the algorithm we used, the machine models were encrypted in such a way that you can’t reverse it. Effectively we’re encrypting the face and none of the original pixels are there. 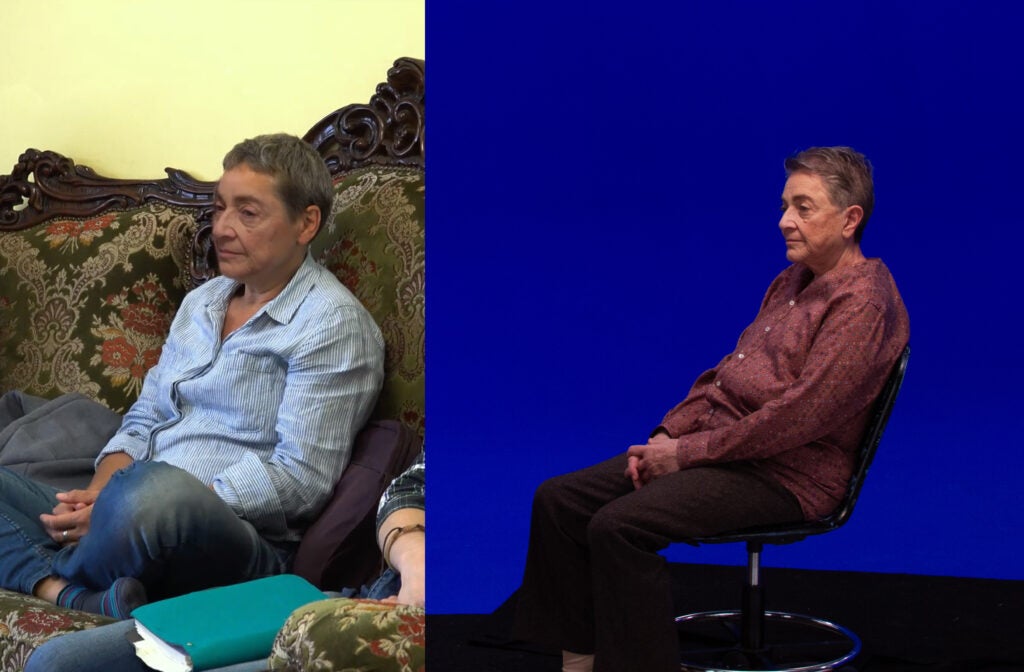 David, can you describe your own research and methodology with the visual effects?

FRANCE: Yes. An important step was when we went to the Neuropsychology Lab at Dartmouth, and we brought these approaches that we had developed to disguise the subjects. Some were animated, some were silhouetted. And we put them before an actual human subject trial, where they measured each sample for empathy. That’s how we settled on the slight blur. We knew that wasn’t encroaching on people emotional connection, yes still had “the tell” that we were looking for.

What’s something you discovered during the Dartmouth trials?

Well, they had done studies at that same lab with Professor Thalia Wheatley about empathy being so connected to the eyes. So we thought, “Oh, what if we had the actual eyes of our subjects, but the face would otherwise be digital, that would help being people in.” But the opposite happened. It creeped them out. Professor Wheatley is one of the uncanny valley experts and she was even surprised at how poorly that did in front of her subjects.

And with that knowledge, you filmed the faces of the volunteers in Brooklyn?

LANEY: We shot in Brooklyn for a week. We call it data acquisition, it was all face capture, for all the volunteers who sat in front of a bluescreen and lended their faces as human shields. We went with a nine-camera array to minimize the amount of time the volunteers would have to sit, doing strange movements with their necks and head. We had to get a lot of different angles in different light to capture the face. 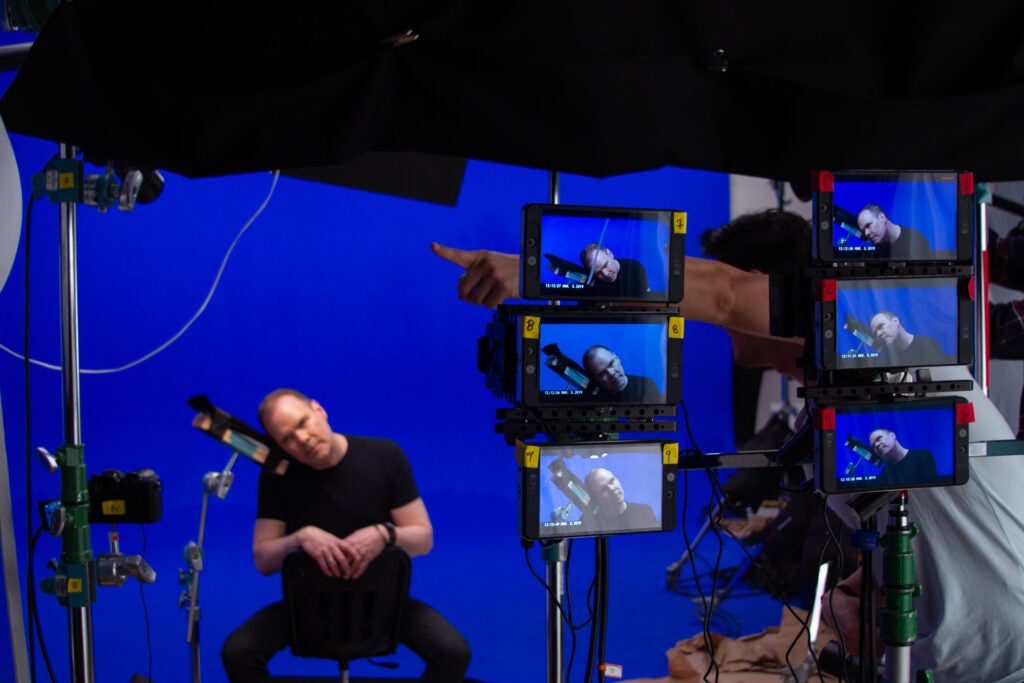 FRANCE: Though there are 23 people covered in the film, there were fewer people who were volunteers. At least one person’s face is on two different bodies. It worked perfectly because this person was on both a male body and a female body. One of our trans activists, who volunteered, and it really worked out well.

The volunteer who plays “Maxim” in the film and who’s face is on the poster — what is his name?

FRANCE: He’s anonymous. Most of our volunteers are anonymous for various reasons.

There’s a powerful moment with him, where the digital face dissolves away in a courtroom, as the real life subject is coming forward about the abuse he’s suffered.

FRANCE: He’s reclaiming his name and his story of tragedy and abuse in this genocide. With his own face. That moment became a pivotal part of our story and how visual effects would be a real crucial part.

FRANCE: Because we knew even before we began our post-production that that moment would occur. So we had a question of whether or not to cover him at all, since he’s identified himself. But we felt that having already introduced visual effects as an editorial idea, that it would help us see and feel his courage right there.

LANEY: It was a great philosophical perspective on how we would go about this. That moment helped to reinforce our goal.

Ryan, what has been the reaction to your colleagues in the VFX community?

LANEY: Positive. I was expecting a bigger backlash or a bigger misunderstanding on what we were trying to do, but I’ve had a number of former supervisors who have reached out and told me how excited they are to use their skills to help documentary films. That’s overwhelmingly positive. And bringing attention to the film is a great for the message that the film is bringing to the world. That’s the really beneficial part.

“Welcome to Chechnya” will appear in the Oscar Nominations Preview issue of TheWrap’s awards magazine.