A new look at director Steven Spielberg’s first-ever musical “West Side Story” was released during the American Music Awards on Sunday night, and 20th Century Studios is hoping the theatrical-only release will bring audiences out in droves.

Based on the Broadway musical by Arthur Laurents, Leonard Bernstein and Stephen Sondheim – which is loosely based on “Romeo and Juliet” — “West Side Story” tells a tale of star-crossed lovers in 1957 New York City. Ansel Elgort is Tony while Rachel Zegler is Maria, and together their love brings their separate factions in conflict with one another as Tony and Maria hope only for harmony.

Spielberg enlisted his “Lincoln” scribe Tony Kushner to pen the screenplay for “West Side Story,” which was not envisioned as a remake of the 1961 Robert Wise film but instead a new adaptation of the stage musical. 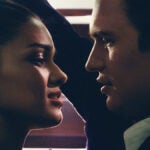 The film is being released exclusively in theaters on Dec. 10, just in time for the holidays. No doubt 20th Century Studios is encouraged by the recent theatrical success of films like “No Time to Die,” “Dune” and most recently “Ghostbusters: Afterlife.” Granted, a Steven Spielberg musical is no sci-fi epic or Bond film, but it’s the kind of adult-skewing film that often performs well in the December corridor.

The three-time Oscar-winning filmmaker has long hoped to make a musical, and he brings his masterful eye for shot composition and stage direction to vibrant life with “West Side Story,” uniting with longtime cinematographer Janusz Kaminski to offer their most colorful live-action film since 2002’s “Catch Me If You Can.”

Spielberg is already at work on his next project, a coming-of-age story based on his experience growing up in Arizona starring Michelle Williams, Paul Dano and Seth Rogen. Spielberg co-wrote the screenplay himself with Kushner. The film is currently in post-production.

The cast for “West Side Story” also includes Ariana DeBose as Anita, David Alvarez as Bernardo, Mike Faist as Riff, Josh Andrés Rivera as Chino, Ana Isabelle as Rosalía, Corey Stoll as Lieutenant Schrank, Brian d’Arcy James as Officer Krupke and Rita Moreno (who played Anita in the 1961 film) as new character Valentina, who owns the corner store where Tony works. Moreno also serves as one of the film’s executive producers.

Check out the new “West Side Story” trailer in the video player above.