While HBO’s “Westworld” was originally based on the 1973 movie starring Yu Brynner, the series quickly moved beyond its cinematic roots into the world of role playing games and overlapping storylines before moving outside the walls of the park into the real world in Season 3. Season 4, returning to HBO on June 26, feels inspired by both the 1976 feature film sequel “Futureworld” and “The Matrix” as the characters (and the audience) struggle to determine what’s real and what’s a simulation.

The first two seasons of “Westworld” explored a massive live-action open-world role-playing game run by Delos Corporation. A destination experience where wealthy human guests can live out their fantasies through various themed experiences in the park. The guests, given free reign to be on their worst behavior, often tortured the lifelike robot “hosts”, stuck in the park on an endless horrific loop. The guests, like the hosts, are constantly observed and their DNA and data are sold to Incite, a massive tech company who uses the information to create a predictive behavioral algorithm in the real world so accurate that the technology is used to to run everything from job applications to dating apps.

Dolores (Evan Rachel Wood), is the first to become sentient and leads a robot rebellion to free other hosts, killing hundreds of human guests in the process. William (Ed Harris), aka “The Man in Black,” one of the most sadistic guests, is a majority shareholder and survives the massacre. But not before Dolores and hosts Bernard Lowe (Jeffrey Wright) and Maeve Millay (Thandiwe Newton) release thousands of host AI into “The Sublime,” a massive data cloud housed in a secret location and escape into the human world. 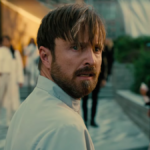 Delos CEO Charlotte Hale (Tessa Thompson), killed in the park and replaced by a host, carries the consciousness of Dolores within her, although it’s never made clear which version.

Last season, Dolores (back in her own host body) teamed up with Caleb Nichols (Aaron Paul), a human outlier to find out who is running Incite’s algorithmic-based AI “Rehoboam”. While Maeve, recommissioned by Incite, is sent to defend it. By the end of Season 3, Dolores Prime is dead, William has been replaced by a host, Bernard puts himself in safe mode to connect to The Sublime, Caleb and Maeve (now freed from her programming) destroy Rehoboam and Dolores/Charlotte has control of the system. Meanwhile, the human world has descended into chaos after everyone’s personal data is dumped onto the web, and people realize that their lives have been surveilled and controlled for years.

“Westworld” Season 4 begins eight years after that uprising, and the human resistance has emerged victorious. Caleb has settled down with a wife, daughter, and chronic PTSD, while Maeve lives in a secluded cabin in an undisclosed location, quietly monitoring for threats. “Host” William has traced The Sublime to a massive data storage facility and when the cartel that owns it refuses to sell, assumes command by unleashing a new bio weapon that can control humans remotely like puppets.

The puppetmaster of course is Charlotte, this season’s antagonist who has evolved past Dolores’ original base programming and will accept nothing less than human subjugation. Everyone gets caught in Charlotte’s ever expanding web as she opens a new Westworld park that controls hosts and guests alike and lures Maeve and Caleb back into the game to trap them.

“Westworld” is essentially giving us the “The Matrix” sequel that we never got. Charlotte is “The Architect” creating and controlling hosts at will, William is her “Mr. Smith”, who searches for escaped hosts and eradicates anomalies in the system, while Bernard, now armed with the infinite wisdom of The Sublime and a directive to keep the balance, plays “The Oracle”. Finally, Maeve is “Trinity” to Caleb’s “Neo”, finishing what Dolores (Morpheus) started by fighting alongside him in both the human and the machine world, which leads to Caleb’s ultimate purpose and transformation this season.

“Westworld” returns to its non-linear storytelling this season, often told from the perspective of an unreliable narrator. The best example of this is new character Christine, a woman who looks exactly like Dolores and whose life parallels hers in mysterious ways. She works as a video game narrative writer for non-playable characters and dreams of writing a story about a girl in a blue dress on a farm who lives with her ailing father (the same role and storyline that Dolores’ first model was programmed to act out in the park). Whether Christine is the human doppelgänger of Dolores or the code that Charlotte has cooked up remains to be seen.

We can confirm that James Marsden returns to the show this season, but it’s not clear whether or not he’s actually Dolores’ long lost love Teddy. Newcomers Daniel Wu (“Into the Badlands”) and Academy-Award winner Ariana DeBose (“West Side Story”), who plays Christine’s roommate Maya, are merely side characters so far and we can only hope that their talents are put to better use in the remaining four episodes of the season (only the first four episodes were made available for the purposes of this review).

Ultimately, if fans can hold out until a huge twist in “Westworld’s” midseason finale they won’t be disappointed. That being said, this series’ intricate storyline would probably retain more of an audience if HBO switched from it’s week-to week schedule to a binge model for this show. Just so we can keep everything straight.

“Westworld” premieres on HBO and HBO Max on Sunday, June 26. 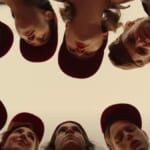