Florence Pugh made her triumphant debut on the Marvel Studios Disney+ series “Hawkeye” in Wednesday’s episode, which opened with a flashback that filled in the gaps of how her character has spent her time since we last saw her in “Black Widow.”

Pugh’s Yelena Belova first appeared in summer’s Marvel movie, “Black Widow,” playing the adopted sister and fellow black widow to Scarlett Johansson’s Natasha Romanoff. The story of that prequel film began in the 1990s, where child versions of Natasha and Yelena were living in the United States with their “parents” as an undercover family of Russian spies. But when their cover was blown, the family was separated and Natasha and Yelena were separated and subjected to brutal Black Widow training. The story of “Black Widow” saw the two reuniting as adults following the events of “Captain America: Civil War,” and by the end of the film Natasha was off to regroup with her fellow Avengers for the events of “Avengers: Infinity War” while Yelena was last seen leaving with a group of liberated black widows, bent on freeing other black widows subjected to mind control around the world.

“Hawkeye” Episode 5 opens in 2018 with Yelena and a fellow black widow on a mission to free what they think is another black widow under mind control. But when Yelena uses the antidote to break her free from mind control, the woman is unaffected – she’s not being mind controlled, she’s working as a contract assassin (and making bank). Yelena takes a breather in the bathroom, only to be snapped out of existence, which is how we learn this is happening at the same time as the Avengers are fighting Thanos (and we assumed as much). In a single shot, Yelena comes back but it’s five years later. The house is wildly different, and the woman she was previously trying to liberate now has a husband and adopted child. 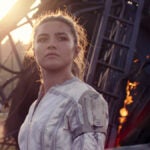 This brings us pretty much up to speed on where Yelena fits into “Hawkeye,” as Episode 5 reveals that she’s been hired by none other than Eleanor Bishop (Vera Farmiga), Kate’s mom, to kill Clint Barton.

You may recall from the “Black Widow” credits scene that Julia Louis-Dreyfus’ Valentina seemed to be pointing Yelena in Hawkeye’s direction, as she gave her a photo of Clint and referred to him as the person responsible for her sister’s death. So, the likely scenario here is Valentina serves as a go-between for the hiring of people like Yelena, who is now hell-bent on enacting revenge for her sister’s death.

So there you have it. After we last saw Yelena in “Black Widow,” she spent her time freeing other black widows from mind control, got snapped out of existence, and then began working as a contract killer for Valentina – which is how she got assigned to take out Hawkeye.

Where do things go from here? We’ll no doubt have a better idea after the season finale of “Hawkeye” premieres on Dec. 22.