“Date Night” isn’t a remake, and it’s set in the present day. But it still feels as if it’s another example of an old truism: The easiest nostalgia is always nostalgia for whatever happened a few decades ago. 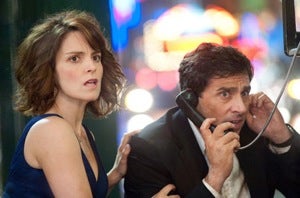 “American Graffiti” and, subsequently, “Happy Days” revisited the ‘50s in the ‘70s, “Boogie Nights” and “Reservoir Dogs” moved to a ‘70s groove in the ‘90s … And now we’re awash in the ‘80s, from the setting of “Hot Tub Time Machine” to remakes like “Clash of the Titans” to a disconcerting slew of projects in the works: “The Karate Kid,” “Red Dawn,” “The A Team,” etc., ad nauseum.
You could call the current wave a lack of imagination, but maybe it’s just a matter of numbers: You go into the movie biz in your 20s, you get a little bit of clout in your 30s, and then you look back fondly at the stuff you loved, however schlocky it may have been, when you were a teenager.
In “Date Night,” Steve Carell and Tina Fey play a suburban New Jersey couple who venture into Manhattan in an attempt to spice up their boring weekly ritual, and through happenstance wind up running afoul of a pair of goons and experiencing one of those Wild Nights in the Big City.
It’s not an ‘80s remake in the literal sense — it’s no “Private Benjamin” with Anna Faris or “Overboard” with Jennifer Lopez or “Police Academy” with God-knows-who they’ll get for that pivotal Steve Guttenberg role. But I can’t help but think that it’s all part of the same sensibility that says that those films are worth remaking, that John Hughes is the one dead person who deserves a separate seven-minute tribute on the Oscar show.
The good news is that the movie hearkens back to some relatively cool ‘80s relics, to Jonathan Demme’s “Something Wild” and Martin Scorsese’s “After Hours” and Susan Seidelman’s “Desperately Seeking Susan”; it’s an ‘80s style innocents-lost-in-the-metropolis caper flick, with a touch of action comedy (director Shawn Levy says “48 Hrs.” and “Beverly Hills Cop” were inspirations) thrown in, and with Fey and Carell in place of, say, Rosanna Arquette and Griffin Dunne.
(I like “30 Rock” and “The Office” as much as anybody, but I’m not sure that’s an upgrade.)
And while there’s no New Wave soundtrack to pay homage to the days of shoulder pads and mullets, Carell’s character does admit that his ultimate sexual fantasy involves Cyndi Lauper. So there you go.
The problem is that while Levy may be the other King of the World at Fox (a couple of “Night at the Museums” will do that for a guy), he’s no Demme or Scorsese. So what we get is an affable enough movie that slides by on the strength of its stars’ TV-bred likeability, and comes up short because likeability isn’t enough to compensate for uninspired slapstick action and a lot of running and thrashing.
It is good to learn, though, that sticking two cars together, front-bumper-to-front-bumper, and then equipping one of them with a wisecracking, panicky (African-American) cab driver, does not elevate a routine car chase into something special.
But, you know, it was a nice try.
Levy also tries hard to give his innocents-adrift tale some of the kink that “After Hours” and “Something Wild” had – but his is a PG-13, suburban-steakhouse kink, despite the best efforts of a gyrating Fey, a shirtless Mark Wahlberg and a tattooed James Franco.
Hey, give me (a young) Melanie Griffith tying Bill Pullman to a bed in “Something Wild” any day. And give me the scary Ray Liotta from that movie over the ineffectual Ray Liotta from this one.
I guess that’s what happens with you’re working with 20-odd years of distance and a mainstream audience in your sights.
Granted, some of “Date Night” has nothing to do with any ‘80s precursors — marital malaise isn’t a time-stamped premise for comedies, and at the screening I attended, the biggest laugh went to a very 21st-century line about a house that originally listed at $1.8 million, and is now selling for $380,000.
But the movie still feels like a look back, and it still leaves me nervous about this rush to revisit (or at leave find inspiration in) a decade in which everybody sported a truly embarrassing look at least once.
Then again, Cyndi Lauper was kinda hot.