Kris Tapley and Anne Thompson discussed the matter in their “Oscar Talk” podcast last Friday, Pete Hammond visited the subject in Notes on a Season yesterday, and then Tapley returned to the well later in the day to sum things up at In Contention.

At the moment, here’s how things stand: Paramount will likely mount a best-actress campaign for Vera Farmiga in “Up in the Air,” so as not to conflict with the supporting-actress campaign for that film’s Anna Kendrick. Sony Classics has decided that Christopher Plummer, playing Leo Tolstoy in “The Last Station,” is a supporting actor, while Helen Mirren, who plays his wife and reportedly has about the same amount of screen time, is a best-actress contender. James McAvoy, originally thought to be a supporting-actor candidate in the same movie, may now receive a best-actor push. 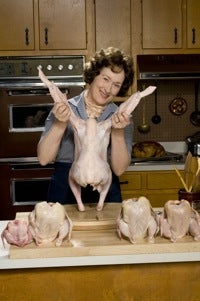 And then there’s the Meryl Streep problem: if she’s a best-actress favorite for “Julie & Julie” (right), what happens if she’s also awards-worthy in “It’s Complicated”? Might it not be better to insist that “J&J” is more about the Amy Adams character, thus pushing Streep into the supporting category and leaving room for a best-actress campaign for “It’s Complicated”?

Or, since she seems to be a lock for playing Julia Child, should Sony just leave well enough alone?

What’s getting lost in all this jockeying and strategizing is that the decision isn’t really in the hands of the studios or the Oscar campaigners. They can send out letters or take out ads suggesting appropriate categories, but the real placement is up to voters in the Academy’s actors branch, who have the right to nominate performers in whatever category they think is appropriate.

In most categories, the nominating ballot is accompanied by a list of every qualifying achievement. But there are far too many eligible actors to make such a list feasible in the acting categories.

And while the voters usually take their cue from the campaigns, it doesn’t always happen the way the studios want. Way back in 1981, for instance, Paramount was pushing Susan Sarandon for a supporting-actress nomination in “Atlantic City.” Voters disagreed and gave her a best actress nomination.

Keisha Castle-Hughes (“Whale Rider”) was another presumed supporting-actress contender who won a best-actress nomination. And as Hammond pointed out, last year Kate Winslet was nominated for best actress in “The Reader,” even though the initial campaign on her behalf had pushed for the supporting actress category.

But you can’t be nominated for the same performance in both categories – PricewaterhouseCoopers sees to that by tallying ballots in the lead and supporting categoriess simultaneously. Once an actor or actress secures a nomination in one category, any votes they may have in the other category are cancelled.

This year, it’s likely that regardless of what Sony decides to do with Streep’s “Julie & Julia” candidacy, she’s already a lock for a best-actress nomination. When it comes to Farmiga, Plummer, McAvoy and a few others, maybe the voters will pay attention to the campaigns.

But then again, maybe not.