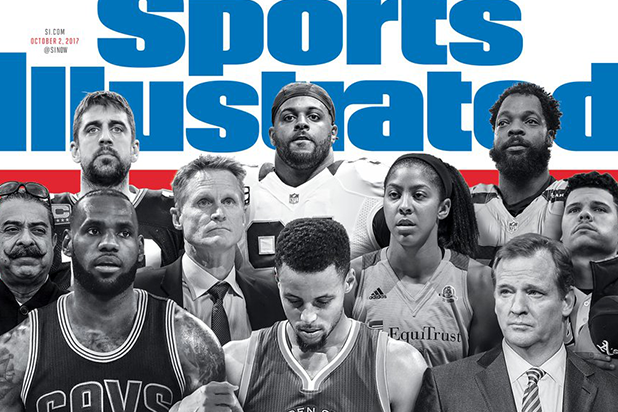 Sports Illustrated’s latest cover addresses the ongoing debate over NFL players protesting racial inequality in the U.S. by kneeling during the national anthem, but the issue is not being well-received on social media as it’s missing one key player.

Sports Illustrated tweeted out a picture of the cover, which has “A Nation Divide Sports United” scrawled across the images of the athletes, who have been Photoshopped linking arms. It also includes a link to a story titled “Athletes Are Not Going to ‘Stick to Sports’ and That’s an Admirably American Thing.”

Sports Illustrated Executive Editor Stephen Cannella addressed why Kaepernick is missing from the cover in Tuesday’s “SI NOW,” saying that they wanted to focus on “the way new voices emerged” over the weekend in the debate.

“He’s the guy who sort of started it all, I think we see a lot more people in various ways sort of join the movement for lack of a better term this weekend. That’s what we were trying to capture with this cover,” Cannella went on. “Colin Kaepernick is on that cover, even if his face isn’t, and his name’s not there, we all know who stands behind this movement, we all know who got it started. Colin Kaepernick has many more brothers today than he did a week ago.”

THIS WEEK'S COVER: In a nation divided, the sports world is coming together https://t.co/sKPjrhHhmZ pic.twitter.com/3yzkvV1OCl

Several Twitter users pointed out that Kaepernick deserves a spot on the cover, especially has been a free agent for the 2017-2018 season despite his merits as a player after starting the protests against racial inequality and police brutality last year.

NFL chief Goodell, however, landed a spot in the front row, depicted linking arms with Curry, despite his known ties with Donald Trump. Goodell did call Trump’s remarks “divisive” on Saturday morning, adding that they show “a failure to understand the overwhelming force for good our clubs and players represent in our communities.”

Colin Kaepernick is nowhere to be seen on this cover, but Roger Goodell gets a front-row spot? https://t.co/qwm5fXFfb7

Man #SportsIllustrated GTFOH. really, roger goodell in the front!? And where tf is Kaep??? pic.twitter.com/v0tlfJ98Zu

The Sports Illustrated "protest" cover includes a man who gave a $1,000,000 to Trump but not Colin Kaepernick who lost his career over it. pic.twitter.com/TyQ6eD4cuP

Others were more angry that a sports outlet was weighing in on a social issue, and angrier still about the NFL players who choose to protest during the anthem.

I've gotten this magazine every month since I was 12. I am canceling my subscription today

Thank you for giving me a reason to end my subscription!

Trump made comments last week at a rally in Alabama attacking players who kneel in protest during the anthem. “Wouldn’t you love to see one of these NFL owners, when somebody disrespects our flag, to say, ‘Get that son of a b—- off the field right now, out, he’s fired. He’s fired,” Trump said on Friday. Over the weekend, he continued to attack the NFL with several tweets.

As recently as Tuesday morning, Trump called for the NFL to ban kneeling during the anthem.

Kaepernick was the first NFL player to kneel during the anthem in 2016. “I’m going to continue to stand with the people that are being oppressed,” he told reporters at the time. “To me, this is something that has to change. When there’s significant change and I feel that flag represents what it’s supposed to represent, and this country is representing people the way that it’s supposed to, I’ll stand.”