On Amazon Prime Video’s “The Wheel of Time,” the One Power comes with great cost. That’s certainly what Madeleine Madden’s Egwene al’Vere character learned after a painful lesson with the Children of Light in the first season’s fifth episode, titled “Blood Calls Blood.”

In Episode 5, Egwene and Perrin (Marcus Rutherford) spent some rather excruciating time in the captivity of the Children of the Light and their Lord Commander Eamon Valda, who tortured them both in his bid to uncover Aes Sedai abilities within his female captor. It was a brutal episode for the small village pair, as Egwene had her own Cersei Lannister-style brutal scrub clean, and then was strapped to a chair, with her wrists tied down, and the threat of losing them over the magic Valda assumed she had. Perrin, too, was tortured under Valda’s hand, in an attempt to get Egwene to reveal herself, only for him to be the one revealing his powers, and a dark secret he’s kept since the premiere episode.

Madden addressed these latest twists in a recent interview with TheWrap, and hinted there’s more magical reveals to come. 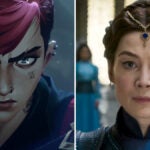 TheWrap: Tell me about filming the, what looked to be very uncomfortable, very intense scene for your character where she was scrubbed by the Children of the Light.

Madeleine Madden: Yeah, look, it was a very, very intense scene and you know, it was handled with a lot of sensitivity. Our brilliant showrunner, Rafe Judkins, and writers, and producers AK [Amanda Kate Shuman] and Justine [Juel Gilmer] were brilliant in making me feel really comfortable with the scene. I was very much a part of the decisions that were made surrounding it, like who the men would be in the scene, who were just so wonderful and gracious and respectful. Obviously, this was a really horrifying scene for Egwene and an experience so, it was difficult that’s for sure. I think it was a really important moment for Egwene because it really fueled a lot of her anger and resentment towards the Children of the Light. And I think the hardest part of that scene was probably the brushes, to be honest. Our director, Salli [Richardson-Whitfield] … was very kind with making sure that we had the softest brushes out there. After a couple of hours they started to get a little bit rough, but honestly, that was probably the toughest part of it. Other than that, it was a very important scene and like all difficult scenes, you want to be in there and doing it for and with your character. 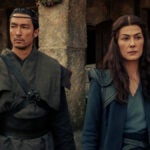 So Egwene grabs the Aes Sedai rings at the end of the episode from Valda’s tent. Tell me about her grabbing them and why she did that, because when she saw them, obviously it was just horror, horror.

Absolutely. I think from her brief encounter with Valda she sees how brutal he is and I think she’s horrified at the fact that he has all of these Aes Sedai rings. She understands how powerful these Aes Sedai are and everyone in the world respects them, and they hold so much power and authority in the world. And the idea of even murdering them in such a brutal way is just horrifying to her. I think Egwene is such an upholder of justice that her taking these rings back is an act of defiance and bringing justice to these women that she respects so much. Taking the rings and giving them back to the White Tower so these women can be respected and be honored in the way that she feels that they should, I think that’s something that not a lot of Aes Sedai even, no matter how powerful they are, could have survived and could have taken those rings back. So that is something that just shows what a survivor and how strong and determined Egwene is.

So from that moment to one that probably tore at her heart and gave her conflicting emotions — [Perrin] finally revealed he killed Laila accidentally. How did that impact your character? Obviously, she tried to share with her friend that hey, it was an accident, but there’s got to be some mixed feelings there right?

Of course, yeah. I think she doesn’t know to what extent but she knows that something happened on Winter Night that is haunting him. She can see that he’s broken and he’s carrying this enormous amount of guilt and she can see this guilt and understand that it’s not your fault. She knows Perrin. Maybe if she would have found out at the beginning of their adventures, she might have felt differently, but because they’ve spent so much time together on the road and she’s gotten to know how gentle he is and what a kind soul he is [she recognizes this was] an accident. And I love the line that she says of like, [it may] take your whole life to realize this, but you will. She understands that this isn’t something that you can just say it’s not your fault and you can get over it. It’s going to take your whole life to understand what happened that night. And I think she wants to share that burden and help him carry a bit of that. 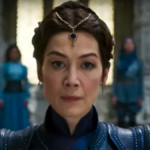 In this episode Egwene finally got to see Perrin’s full sort of wolf-like abilities/situation. What does Egwene think of it and is that going to lead to more reveals later? How fun was that — another wolf scene. You had one before.

Absolutely. I mean, who doesn’t? Who doesn’t love a good wolf [scene]? I think Egwene — she’s always felt like she was the special one. And I think she’s always been told that she is a special one and she has this gift. She was told that from Nynaeve, probably her parents and Moraine, so she probably always thought that she was the Dragon Reborn. I think when she sees Perrin with his golden eyes and the fact that he can somehow communicate to wolves, it makes her question, ok, maybe it’s not me. Maybe it could be Perrin. So, I think we see that all of our heroes have some sort of gift and ability in their own way and whether they like it or not, they all have a part to play in the turning of the Wheel. [That scene] — it’s a moment that is so beloved by fans. This part of Perrin’s life. It’s really exciting. … Who doesn’t love to see a wolf on screen?

Especially coming to the rescue.

I know. And I think in that moment when she sees that he knows that they won’t hurt us, that’s added up for her. At the beginning, the wolves are moving more down mountain and following us. They’re not there to hurt us. So I think this is something that’s really fascinating to her, but she’s also scared for him. I think she sees the way the White Cloaks hunt down women that can channel [and] she’s afraid of what people will do to Perrin if they know that he has ability.

We’ll wrap up with this question, which is about your character: are we going to see more development with Egwene’s powers? Obviously, they didn’t quite work the way she had hoped they would when her wrists were bound, but it’s been a slow build. Can you give us hints at what’s going to come the rest of the season in terms of her power and her growth?

Yeah, absolutely. I think each woman has their own different style of channeling and what the access to this power means. For some, it’s exhilarating and exciting for others, it’s scary and feels wrong. We know with Egwene that this power — she’s attracted to it and wants to learn how to control it and grow more powerful and hone this skill of hers. I think she is a very devoted person to her sense of duty and her ambition. And so this is something that we definitely see her learn how to control, but also the difficulties that she faces with this power and using it. So, absolutely. I think once you touch the One Power, your life is forever changed after that moment — for every character, I believe. So, absolutely, we do.