‘The Morning Show’ Design Problem: Go Around the World Without Leaving L.A.

A version of this story about the production design of “The Morning Show” first appeared in the Below-the-Line Issue of TheWrap’s awards magazine.

Producer and director Mimi Leder promised production designer Nelson Coates that he’d have lots of things to design if he joined Apple’s series “The Morning Show” for its second season, but he had no idea just how complicated the job would get. For that, you can blame the COVID-19 pandemic, which shut down production three-and-a-half weeks into Season 2 and sent the show’s writing staff into a hiatus spree that resulted in an entirely rewritten season.

“When we came back, what I thought would be contained and comfortable with a small cast instead had gotten enormous,” Coates said, laughing. “The first scene they handed me was Times Square on New Year’s Eve, and we also had Las Vegas, Green Bay, New Orleans, Lake Como in Italy, Beijing, Wuhan…”

To complicate matters, quarantine rules meant that the production could not leave Southern California — sorry, no trips to New York City to shoot a few days of exteriors for a show set in Manhattan — and upscale cities like Beverly Hills and Pasadena had banned all filming. Plus, he said, “the actors didn’t really want to go into buildings in downtown L.A.” 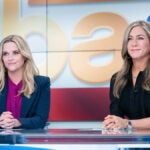 “The Morning Show” ended up taking over a stage at Sony and building an entire office complex there. “We had eight weeks from the minute I started drawing until filming to create offices, conference rooms, a big bullpen area, hallways and elevators,” he said. “And then the walls would fly at the end of hallways and the graphics and furniture would change to become a whole other floor. We were able to do 24,000 feet of office in a 12,000-square-foot footprint.”

The New York street scenes were mostly shot in downtown Los Angeles, even though the production never traveled there. (For Season 1, it spent four days there.) “I wanted to make the show really feel like it was shot in New York,” Coates said. “So in sequences in restaurants where you see New York outside the windows, we included the scaffolding, the street vendors, the little corner kiosks where you can charge your phone. We had lots of buses and 18 taxis all the time, and we tried to create a world of life that no one would guess was done in L.A.”

The interiors, meanwhile, were connected to the characters, with Billy Crudup’s media-company CEO, Cory Ellison, getting a particularly impressive space in a posh residential high-rise. “We wanted to give him a presidential suite, a power suite,” Coates said. “But at the same time, the first season ended with sexual-harassment elements, so I wanted to feel the pervasiveness of a certain kind of art and imagery. So over the bed is a reclining nude, and there are a lot of male and female figures built into the sets.”

In downtown L.A., Coates also found a courtyard that could be transformed into New Orleans’ French Quarter. For a train station in Wuhan, China, where a reporter goes at the beginning of the pandemic, he used a Metrolink station in Anaheim that had similar architecture to one in Wuhan, with his crew transforming an eight-car train into a Chinese subway train in one hour.

(Metrolink officials loaned them the train but wouldn’t let them dress its exterior until it arrived at the station just before filming.) 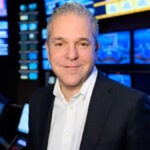 And then there was Lake Como, where Steve Carell’s character has retreated after a sex scandal ended his career in Season 1. “Knowing Italy very well, I knew that Piazza Cavour in Como looks right out onto the lake and has cobblestones,” he said. “And I knew two streets in L.A. that had cobblestones like the ones there, and they had buildings that were Italianate in structure. So we used those and covered up the L.A. brick on the buildings.

‘I was able to make two full streets, and then we would use blue screen to expand the streets and put extensions on top of the buildings. We also had some buildings that were visible in reverse shots that we didn’t have access to, but they let us put elements in front of the windows. So when you do reverses of Steve Carell, it looks like you have fully-dressed buildings just by putting tables and awnings out in front of them.”

For the lavish villa where Carell’s character lives, Coates scoured the Southern California cities that still allowed filming and found an estate just outside Pasadena that architect William Neff had built in the 1920s, allegedly based on a Florence residence designed by Michelangelo. “A high school had been using it for an events center,” he said, “and we convinced them to let us landscape the whole thing, paint it, do faux marble and stone and add architectural detail. I think it worked out pretty well.”

For the interiors, he brought in a mixture of real antiques and more modern furnishings. “It was designed to look like years and years of a family owning it,” he said. “There’s a flat-screen TV in one room but a tube TV in the other. My European friends who have that level of opulence don’t change everything out the way we do in the United States, where we have to have the latest and the greatest. They’re more like, ‘No, we’ve had this forever and it still works.’”

In the end, the entire season was shot in Southern California during the pandemic, despite all those scenes taking place around the world.. “They would plop scripts on my desk and go, ‘So, how are you gonna figure this one out?’” he said with a grin. “But I’m pretty used to coming up with solutions.”