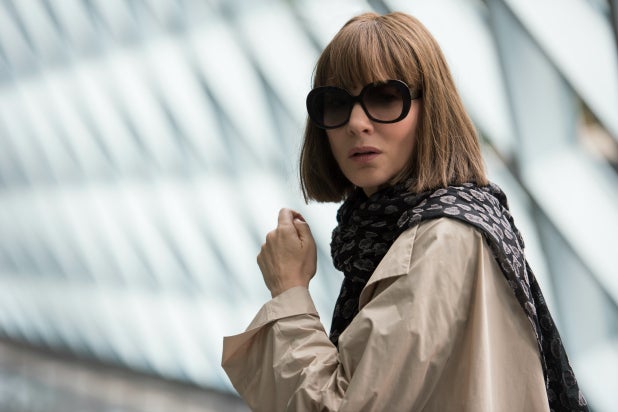 Fans of Maria Semple’s book-club staple have long loved the mad protagonist of “Where’d You Go, Bernadette”: a middle-aged mother who has lost her way and, quite possibly, her mind. Semple’s novel portrays this dramatic unraveling via a clever collection of modern detritus — emails, receipts, memos and interviews.

Richard Linklater’s adaptation is a much more straightforward affair, heavily reliant on star power to replace the literary stylings he and his co-writers (Holly Gent, Vincent Palmo, Jr.) have left behind. This approach is not an ideal match for the source material, and many may wish the book had been adapted by a filmmaker more connected to its distinctive idiosyncrasies.

But those who arrive without any preconceptions — or are willing to stray from the novel’s style — will appreciate the assets of a modestly engaging and gently touching dramedy.

Decked out in an Anna Wintour bob and ever-present shades, Cate Blanchett is our frustrated misanthropist, Bernadette. Her husband, Elgin (Billy Crudup), spends his days (and often his nights) working on a cutting-edge project for Microsoft. Their daughter, Bee (excellent newcomer Emma Nelson) is acing eighth grade and hoping to go to boarding school. And Bernadette is hiding in their decrepit Seattle mansion, a former reform school for wayward girls.

Bernadette’s primary connection to the outside world is with Manjula, a virtual personal assistant in India. She also has the occasional contretemps with her severely uptight neighbor, Audrey (Kristen Wiig). The only person who understands Bernadette is Bee, who is also the only person uninterested in judging her. Indeed, Bee is delighted rather than surprised to discover that her mother, now universally considered a basket case, once won a MacArthur Genius Grant as the sole woman at her prestigious architecture firm. Bernadette is still revered as a visionary in her industry, but after several professional and personal tragedies, she retreated into the relative safety of her home.

Only it’s not that safe, anymore. Once you start rolling down a hill, it’s hard to stop. And just because you’re paranoid doesn’t mean they’re not out to get you. So when Bee plans a family trip to Antarctica, every alarm bell in Bernadette’s already-overworked system goes off simultaneously.

That may sound like a lot of plot, but Linklater has actually streamlined many of the book’s complications. This makes for an easy watch, but also strips much of the original story’s depth. He’s made a similar trade-off in casting, stocking the film with pros — Laurence Fishburne, Judy Greer, Zoe Chao, Steve Zahn, Megan Mullally, Kate Burton, David Paymer, James Urbaniak — who flash by, welcome but underused. And Blanchett’s fans will love watching her act up a storm, devouring every scene like the star she is. But the reason this particular book resonates with so many people is that its brightly-burning heroine is also an everywoman.

Bernadette may overreact to small slights, but we recognize her pain. She expresses remorse over and over, but no one apologizes to her. Also, is she actually losing her mind? Or is she just worn down by a lifetime of micro-aggressions and insensitivities, disappointments and heartbreaks? Which is to say, is she just like us, on a really (really, really) bad day?

And yet, there is nothing ordinary about Blanchett’s performance, which features a carefully-cultivated East Coast accent and a neurotic edge sharp enough to draw blood. She’s committed to playing a larger-than-life character, and while it is an undeniably entertaining turn, it leaves little room for realism or relatability.

The truth is that Blanchett could have made a terrific Audrey, while Wiig might have been better suited for Bernadette. Of course, there is no universe in which a production company, even a bold one like Annapurna, turns down Cate Blanchett as the lead in their high-profile adaptation of a bestseller. But if stubborn outliers like Bernadette ran things, there might be. In her world, in fact, this might have been a daringly original indie to match its “weirdo enigma” protagonist. (Perhaps even with a female director at the helm of this deeply female story?)

None of which is to say that the movie fails on its own terms. Blanchett’s whirlwind portrayal is consistently diverting, and Linklater makes the most of her lovely chemistry with the talented Nelson. Crudup and Wiig are both stuck in pared-to-the-bone roles but unearth memorable moments of humanity within them.

Frequent Linklater collaborator Shane F. Kelly’s cinematography is especially striking, whether he’s following Bernadette into the expansive wilds of Antarctica (technically Vancouver) or tracking her through the halls of her simultaneously cavernous and claustrophobic Seattle (actually Pittsburgh) home.

The problem is that in Linklater’s version, we always know where, and who, Bernadette is. So for those who’ve read and loved Semple’s story, that troubling, titular question takes on a different meaning altogether.