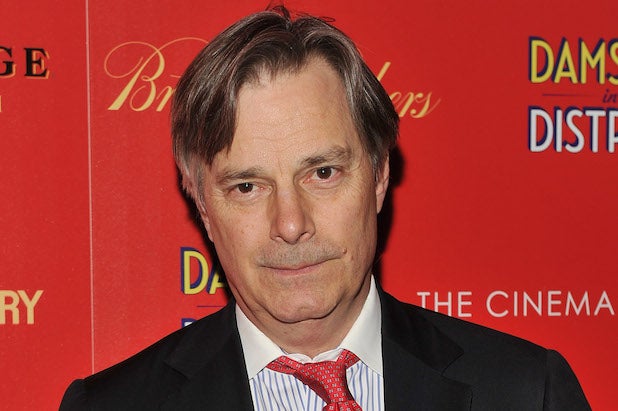 Whit Stillman‘s characters have always loved books, so it may make sense that his latest project is for Amazon — a company once built on sending stories by mail. “The Cosmopolitans” has classic Stillman elements: romance, young people at the edge of glamour, a beautiful city, and — most importantly — no film studio backing.

Stillman rose to fame with three films chronicling what he called the “urban haute bourgeoisie” — literary-conscious, fashion-conscious, and most of all self-conscious young strivers trying to politely claw their way to the top. Though his films have all been scrappily produced indies, his characters imagined themselves as polished intellectuals — prim, eager-to-please, idealistic.

Introduced to us in 1989’s acclaimed indie hit “Metropolitan,” 1994’s Spanish-set “Barcelona” and and 1999’s “Last Days of Disco,” they were an odd-fit with the road-tripping, fetish-indulging, drug-tripping stars of other great ’90s indies. Which may have been why someone gave Stillman the terrible advice to enter the studio system.

If his films sometimes fit awkwardly into the indie world, they were absolute outcasts with studios, which don’t exactly prize the subtlety and self-mocking humor of Stillman’s dialogue. (“Barcelona” finds one character complaining that everyone worries about subtext, but no one worries about what’s on the surface. What’s the name for that? he asks, before he is incredulously informed: “The text.”)

“I’d write the scripts and either by the time I’d finish the scripts, the execs I started with weren’t there anymore, or everything had changed, or it seemed to expensive, and they were very complicated projects,” Stillman explained.

Like his characters, he mixes high ideals with what’s available. He spoke with us while eating a Dunkin Donuts breakfast sandwich.

Stillman finally returned with the well-received 2012 indie “Damsels in Distress,” which starred Greta Gerwig as a college student who wants urgently to do good. Now, he has a brand-new pilot at Amazon called “The Cosmopolitans,” which stars Adam Brody as an American living in Paris. It’s an updated combination of “Barcelona” and “Metropolitan” in a way, featuring outsiders seeking to make it into high society… or at least get some self-confidence.

The project began after several conversations with Amazon, which wanted him to direct a different project in Paris. He had his own tales of life in the French capital, where he lived for nearly a decade. So the company agreed to let him shoot his own ideas.

“It was a lot of work,” Stillman said. “I’ve never had such detailed involvement in something, but it ended up a really good experience. I really admire and appreciate the involvement of the creative executives.”

We talked with Stillman about his career, past and present. You can watch “The Cosmopolitans” at Amazon now.

TheWrap: Has it been tougher to get movies made?

Stillman: It’s always tough for me. It seems like it’s either on or off, and so either I have a patron who is gonna make it happen, or nothing’s going to happen. So in all my years in this business, there’s essentially two people who have said yes to my projects, and that’s over 25 years, and so that’s not a very good record.

You’ve only had two people saying yes, but you’ve created your own sort of genre.

Stillman: Well, I’m just very aware of that horrible period where I couldn’t make things. That ten years that I struck out, and so I’m still a little bit shellshocked from that.

So how do you avoid that?

I kind of started doing it the industry way… These producers and film companies had properties they wanted me to adapt and direct, and one thing after another, I had commissions and assignments and all these things. I kind of became like my friends, who are screenwriters and having nice middle-class careers, but they never have a credit for some reason. Maybe their draft attracted the director who turned out to be a writer or had some buddies to write. So I became a kind of frustrated screenwriter.

It’s interesting that it was after three successful films that you were told to do it the studio way. That seems counterintuitive.

I got into a situation with “Disco,” and it was in large part my fault, of not taking responsibility for the budget, of getting into situations where things were much more expensive than they should have been. For instance, advice for young filmmakers: What seems big to our eye in real life doesn’t usually look big on screen or in the camera. So it was a terrible mistake trying to wow people with this enormous disco space. The enormous disco space, that’s expensive, decorating it is expensive, and then the thing that is ruinous is filling it with union extras.

So I ate really well for the next four years when I’d come back to New York, because I’d go to these catered affairs, and if I ever wanted another piece of steak or dessert, I could get it, because all the actors got so much money off of “Disco.”

Also read: ‘Damsels in Distress’ Review: Whit Stillman’s Latest Has Great Lyrics, But the Music’s a Little Off

So now you write it to make it.

Stillman: That’s what “Metropolitan” started as, I had access to $15,000 and so it was just going to be people in a room, but I’ll make it a nice sort of bourgeois room and I’ll have them really dressed up, and it’ll be social pornography. And then I found out that if you have an insurance policy that costs as little as $40,00 you could get permits from NYC and shoot for free anywhere on the street.

So I started writing scenes for the streets. I thought, why have it in one room when I could have it in other places? In “Metropolitan,” whenever people go into an elevator, they’re generally going into a closet and we just made an elevator sound. And very rarely in “Metropolitan” do people go from one room to another, because normally I’d have one good room in this location to shoot in, and a hallway in another location.

There’s a thing where the actors arrive at the South Hampton house, they knock on all the doors, they enter it, they go through a hallway, and into a living room. And it’s the South Hampton house of a friend/investor, it’s the corridor of my old loft in SoHo, and the interior of the living room is my childhood best friend’s house from Croton-on-Hudson, New York. It’s seamless!

Amazon asks fans to vote on which pilots they like best. Is it scary to have the show’s future be put up for a vote?

Stillman: I’m hopeful. It is scary because people think, we’ll do publicity here, we do publicity there, and in some cases I’m not sure the audience for that publication will really like anything I do.

You have a specific audience, though, who will support it, I would think.

Why do you think that is?

Stillman: “Damsels” is not realistic, it’s a silly, pixelated comedy that maybe people don’t like. I think it’s the comedy that, if you don’t get what’s going on, it gets irritating. You have to buy into the characters.