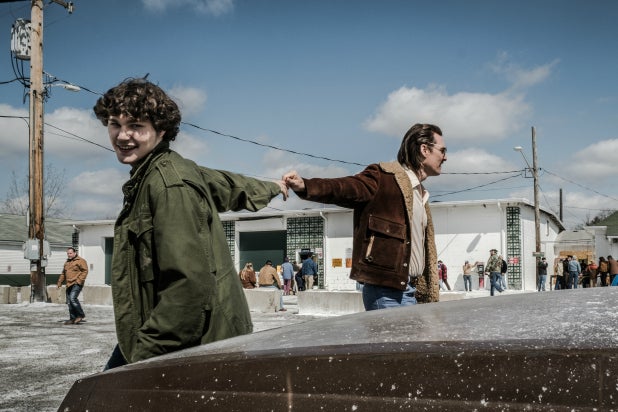 There are times when you watch a newcomer in a role and know, just know, that they’ll go on to tackle great, eclectic challenges; with “Call Me By Your Name” still in moviegoers’ rearview mirrors, Timothee Chalamet, for example, is already proving himself an enormous, versatile talent. But other times, such as with Richie Merritt, the star of “White Boy Rick,” you’re no less transfixed, but you wonder: Is this young actor simply perfect in this one role? Or can he countenance others with that beautifully, ordinarily dull expression? While there isn’t a single moment in his performance that doesn’t feel utterly believable, it also seems singularly engineered for this character and this one alone.

“White Boy Rick,” director Yann Demange’s account of the young, wasted life of real-life teen drug dealer and FBI informant Richard Wershe Jr., is punctuated by surprising verisimilitude that uplifts a latter-day “Scared Straight” premise beyond the boundaries of the A-list cast brought in to bolster its prestige. But it’s Merritt’s devastatingly authentic turn as a kid propelled by good intentions and naïve ambition to scuttle his own life in order to create a better one for his family that makes Demange’s follow-up to the critically-acclaimed “’71” a frequently indelible cinematic experience, charged with unique energy and impact even when its premise is overly familiar.

Wershe Jr.’s story begins at age 14, when he was hustling dealers at Michigan gun shows on behalf of his father, Richard Sr. (Matthew McConaughey), and then turning around to sell unregistered AK-47s to Detroit drug lords like Lil’ Man (Jonathan Majors) and his teenage lieutenants. It doesn’t take much time for the FBI to connect the dots between the source of the guns and the crimes committed with them, so Agents Snyder (Jennifer Jason Leigh) and Byrd (Rory Cochrane) offer Rick a deal in exchange for protection of his father: buy — and later sell — drugs so they and a local police officer (Brian Tyree Henry) can create a paper trail to nab the “real” crooks. He reluctantly agrees but winds up getting shot after Lil’ Man discovers that he’s working with the authorities.

Rick’s gunshot injury waylays his decision to go back to school, where he’s considered too dangerous to be around other students. But after finding out that he’s inadvertently fathered a daughter with Brenda (Kyanna Simone Simpson), a former classmate, and that his sister Dawn (Bel Powley) is on skid row addicted to drugs, he convinces Rick Sr. to let him sell drugs in order to lift the Wershe family out of debt and give them an opportunity for some sense of normalcy. He soon discovers the very adult consequences of his actions when Snyder and Byrd arrest him and threaten a life sentence unless he helps once again — this time to catch a local politician they believe has underworld connections.

Written by Andy Weiss (“Punk’d”) and Logan and Noah Miller (“Sweetwater”), “White Boy Rick” is leavened with more humor than you might expect, and it’s a welcome flavor offered frequently enough in this tragic story that the whole thing doesn’t feel like an unrelenting downer; one imagines it’s hard to make drug addiction and poverty seem even occasionally amusing, but throw McConaughey and Powley in scene together, bickering over going out for frozen custard as a family, and there’s a funny, humanistic spark here that films like “Black Mass” seem to lack.

What’s further interesting about their approach to this true story is the matter-of-factness with which it’s told from this kid’s point of view: he’s neither a wholesome, corruptible innocent nor a calculating criminal in training, but a kid who’s watched his dad’s lifelong, feckless hustle, and learned how to survive — and occasionally, profit — from a perspective adjacent to and occasionally outside the law.

Although Rick is driven by the desire to reunite his family, and he certainly enjoys the spoils of his particular vocation, the movie never belabors the Wershes’ financial straits nor preys upon them to make more grandiose observations about blue-collar desperation, Detroit (then or now) or more broadly, The Failure of The American Dream. Liberated from direct connections to those larger themes, Rick’s story seems like one of simple fallibility, the misguided notions of a kid who in some cases is misled, and others make actively dangerous choices because the struggle to keep his family together becomes too exasperating to bear.

That feels much more relatable and powerful than any sort of deliberate cultural commentary, especially amplified through the performances of Merritt and the rest of the cast. (At the same time, not one but two separate conversations make the observation it would be “better” if Rick killed someone than sold them drugs, because the criminal penalty would be lower, which is certainly something to think about in the justice system both of the 1980s, when this all happened, and right now.)

Acting can be a tricky thing, and sometimes it can just be a trick, but Merritt has the gift of naturalism, be it an act of design or accident, that cannot be taught. He literally never brings more to a moment than is needed, instead absorbing his surroundings much like Rick must have, processing what next step to take, and reacting with a combination of pragmatism and quiet, buried hope. McConaughey is sort of a perfect foil for this sort of performance (he gives a lot of showy energy), but it works here because it makes Rick seem like his whole life has been an act of observation, the receding background of his father’s flamboyant failures, finally come to bear in his son’s self-destructive choices. Powley further feels like an alchemic combination for this family unit, transcending drug-addict clichés to play a young woman able to turn her desperate need for help into a constant source of gallows humor.

The movie’s sense of place, both geographic and cultural, is similarly specific, but it feels more like a mixtape of atmospheres than the encyclopedic jukebox of Scorsese or his imitators; a soundtrack of pre-hip-hop tracks (such as Bob James’ “Take Me To Mardi Gras”) and early rap classics (Eric B. and Rakim’s “Paid in Full”) provide more or less seamless interstitial music from one stage of his criminal career to the next. But again, what ultimately makes “White Boy Rick” so special is Merritt’s performance, and the promise, the hope that other filmmakers will find the right use for his brand of unforced realism in front of the camera, the sense that he’s not “acting” but actually is the character at his core.

All of which is why frightening future delinquents may be one of the sociocultural motives for this particular type of storytelling, but the artistic effect here is nothing short of inspiring; history has already been made, no matter what — including nothing — Merritt does next.