Justin Timberlake‘s new album “The 20/20 Experience – 2 of 2” could top the iTunes and Billboard charts this week, and he’s about as hot as it gets in the music world. But that hasn’t always translated to high notes at the box office for the singer, who will take another another run at it Friday when “Runner Runner” opens nationwide.

Musicians have been taking their acts to the big screen since Bing Crosby and Elvis Presley, with varying degrees of artist and commercial success.  Will Smith was “The Fresh Prince” before he made blockbusters and Cher won a Best Actress Oscar for “Moonstruck.”  Timberlake isn’t in that league, but he’s near the top of the recent list.

He’s not Mark Wahlberg, the former Funky Bunch front man who’s starred in Best Picture Oscar winner “The Departed” and the raunchy comedy hit “Ted.” But he’s not current hot topic Miley Cyrus in “The Last Song,” Rihanna in “Battleship” or Mariah Carey in “Glitter,” by a long shot.

“He’s one of the rare talents that has successfully made the transition from musician to actor, and that’s an achievement,” said Exhibitor Relations vice-president and senior analyst Jeff Bock.”He may never be a leading man along the lines of Tom Hanks, but in the right project, he’s as solid as they come.”

Timberlake bucked his squeaky-clean ”N Sync image with roles in gritty indie films like “Alpha Dog” and “Southland Tales” early on, then broke out with his portrayal of Napster co-founder and Facebook mentor Sean Parker in 2010’s “The Social Network.” In 2011, he showed his comedy chops in “Bad Teacher” and “Friends with Benefits,” which was well-reviewed and lucrative, taking in $150 million worldwide for Sony Screen Gems.

But then he starred with Amanda Seyfried in Fox’s sci-fi thriller “In Time,” which worked overseas but opened to a soft $12 million and topped out domestically at $37 million in 2011. He followed that up with a supporting role in last year’s Clint Eastwood baseball movie “Trouble With the Curve,” an under-performer.

In New Regency’s Brad Furman-directed “Runner Runner,” Timberlake plays a college student who is cheated out of his tuition money playing online poker and confronts the offshore entrepreneur (Affleck) behind it. He becomes the kingpin’s right-hand man and winds up in a tight spot when the FBI wants to use him to bring the operation down. Leonardo DiCaprio is a producer, and Gemma Arterton and Anthony Mackie co-star. 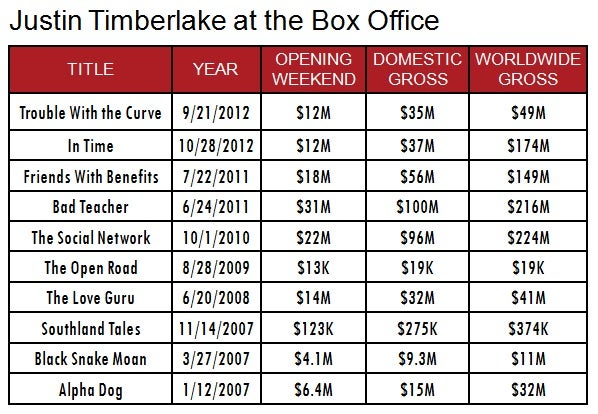 Fox Distribution President Chris Aronson thinks this is the right project for Timberlake.

“It’s a really fun movie and his chemistry with Affleck, who plays a great bad guy, is a big part of the film’s appeal,” he said. Fox marketers are targeting women, both over and under 25, with “Runner Runner,” in part to take advantage of the teaming of the hunky Timberlake and Affleck.

Also read: Justin Timberlake Defends Miley Cyrus: ‘It Was the VMAs, What Did You Guys Expect?’

Back in January of 2001, pop diva Jennifer Lopez had the nation’s No. 1 album and the top film at the box office at the same time with her second album “J. Lo” and the romantic film comedy “The Wedding Planner.”  With the high-profile sci-fi thriller “Gravity” debuting this weekend as well, that’s not going to happen for Timberlake.

Fox sees “Runner, Runner” opening between $10 million and $12 million and analysts are projecting a $40 million domestic total. That would put it on the path to profitability, since its production budget is under $30 million.

While Fox didn’t directly piggy-back onto Timberlake’s album release to push the film, the singer has been front and center on the late-night TV circuit leading up the release of “The 20-20 Experience – 2 of 2.”

“No matter what he’s talking about, all that cross-promotion will have to help,” Bock said.

Timberlake is very much a global music star, and that has helped his movies at the international box office. “In Time” may have been a misfire domestically, but it took in $135 million overseas.

Aware of that, Fox has sought to build momentum by opening “Runner Runner” abroad ahead of its U.S. debut. It brought in nearly $12 million from 38 markets over the weekend, led by Russia with $3 million, and France, Australia and the U.K at about $1.2 million.

Timberlake’s biggest box office score came in a film in which he didn’t appear. He voiced Artie in “Shrek the Third,” which grossed $800 million globally in 2007.